The deck features Zombie-Type Monsters, adapting it to the new format to build and create new Zombie-Type Decks. Beginners of the game will find this an easy to use deck to experience the joy of the Zombie-Type group. It includes a new Red-Eyes B. Dragon counterpart, "Red-Eyes Zombie Dragon".

The "Power Up With Packs!" supplement suggests combining this Deck with "Goyo Guardian," "Krebons," "Emergency Teleport" and "Beast of the Pharaoh from The Duelist Genesis, "Demise of the Land" and "The Lady in Wight" from Light of Destruction, "Mezuki" from Premium Pack 2, "Armageddon Knight," "Dark Illusion," and "Goblin Zombie" from Phantom Darkness plus "Il Blud" and "Strike Slash" from Tactical Evolution. 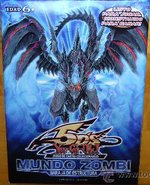