Zachary is a Standard Duelist in Yu-Gi-Oh! Duel Links. He only appears in Duel World (GX). Additionally, he cannot be unlocked, only appearing as an opponent. He can also be dueled in Duel Island: -Gladiator-.

Like many of the other male Obelisk Blue students portrayed in Yu-Gi-Oh! GX, Zachary is always portrayed as an elite snob to his opponent. He will automatically go into denial whenever he is defeated in a duel.

Profile (as a Duel Ghoul) 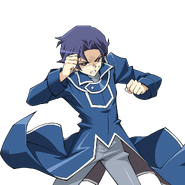 Defeat
*Disclosure: Some of the links above are affiliate links, meaning, at no additional cost to you, Fandom will earn a commission if you click through and make a purchase. Community content is available under CC-BY-SA unless otherwise noted.
... more about "Zachary"
RDF feed
English name
Zachary +
Japanese translated name
Obelisk Blue Male Student +
Video game appearances
Yu-Gi-Oh! Duel Links +