View source
watch 02:53
GTA: The Criminal Enterprises - The Loop
Do you like this video?
Play Sound
This article is about the TCG Deck set. For the OCG Deck series, see Memories of the Duel King.

Yugi's Legendary Decks is a preconstructed set released in the TCG, and the first set in the Legendary Decks series. Its card contents are essentially identical to the three Memories of the Duel King sets from the OCG consolidated into one set, with the sole exception of the Token cards.

Each of the 3 preconstructed Decks include the following: 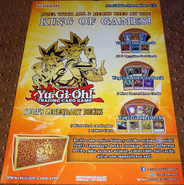 The time allocated for running scripts has expired.