Yu-Gi-Oh! Worldwide Edition: Stairway to the Destined Duel, also known as Yu-Gi-Oh! Duel Monsters International - Worldwide Edition is a censored version of Yu-Gi-Oh! Duel Monsters 6 Expert 2 (including the card artworks). Released in both Japanese and English, it is set during the Battle City arc. The player duels characters from the anime and manga, participating in a few tournaments and duel single opponents they come across on the map screen. Cards are awarded for various reasons, including defeating opponents, winning tournaments and free cards with the Duelist Weekly magazine. This game contains around 1,000 cards.

The game includes characters from the Duelist Kingdom and Battle City arcs of the Yu-Gi-Oh! anime and manga.

The main focus of the game is participating in tournaments and collecting cards, but a small plot section occurs, where the player battles with the Ghouls.

After defeating the five Ghouls, who randomly appear, Téa controlled by Marik leads the player to the Ghoul's Pyramid. Here they must win five duels in a row, proceeding to a new chamber after winning each. The first is against Téa controlled by Marik, the next two are random Ghouls, then Joey controlled, and the last is Marik.

After clearing this section of the game, the Ghouls may be faced like normal opponents and in events.

At the start of the game, the player is given a choice of three Decks. After that cards can be obtained through packs opened in the game or the password menu.

In the password menu, the player can get cards by entering the eight digit Card Number found in the bottom corner of real cards.

All Packs in the game contain five random cards, from a set.

After defeating an opponent you meet on the map screen you are awarded a Booster Pack. Special Packs are given for winning tournaments or defeating Ghouls. Every week the player is given five random cards with the magazine Duelist Weekly.

In the Deck & Trunk main menu, there is a bar for achievements such as beating certain Cups, or getting a certain number of cards unlocked. There is no award for unlocking everything on this golden bar.

The weekly duelist prize magazines that the player receives almost always only rewards them with Normal Monsters with ATK between 500 and 1000. Although extremely rare, a pack may contain a Blue Eyes White Dragon card.

After dueling an opponent 99 times, the counter resets to 00 and then back to 01. No record is kept on the total amount of duels with that opponent.

The artworks for "Dark Magician Girl", "Harpie Lady", "Sorcerer of the Doomed", "Turtle Raccoon" (partially), "Ring of Destruction", "Spear Cretin" and "Zombyra the Dark" are uncensored, even in the international release.

If you use "Change of Heart" to take control of a monster, and then "Mystic Box" to give back control of that monster, the monster will return to your field at the end phase instead of remaining in your opponent's control.

There are many cards which simply do not work, and some which even can't be activated. "Graverobber's Retribution" and "Crush Card" are examples of each, respectively. 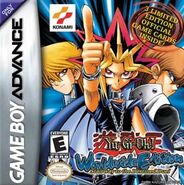 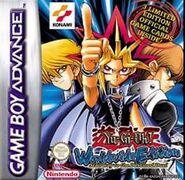