View source
watch 02:46
The Quarry - The Loop
Do you like this video?
Play Sound

Yu-Gi-Oh! World Championship Tournament 2004, known in Japan as Yu-Gi-Oh! Duel Monsters Expert 3, is a video game based on the Yu-Gi-Oh! franchise.

The game has been released on the Game Boy Advance.

In the game, the player can assemble three Decks and can play Duel Monsters against a variety of computer opponents.

The game features the first 1,138 cards released in Japan (201 spells, 109 traps, 55 fusion monsters, 16 ritual monsters, 224 effect monsters and 533 normal monsters). It is noteworthy that you can collect "Dark Magician" and "Polymerization" in two different artworks, counting as different cards.

There are 28 opponents in the game. Each opponent has different skills and Decks revolving around a certain theme (Yugi Muto = Basic, Rare Hunter = Exodia, Yami Yugi = Ultimate, etc.). There is no conversation, you just start duels right away.

Sadly the weaker opponents Decks are full of junk monsters that aren't worth battling like Winged Cleaver. The stronger opposing Decks (Level Four and above) put up a higher challenge since they ignore card limitations.

Since many opponents don't use cards against opponents spells/traps the use of stalling cards like Gravity Bind can make winning a pretty easy task.

After winning a duel you can choose a booster pack containing 5 cards.

In most cases one of the cards is a (highlighted) rare card. There can be only 1 rare card per pack. Since the AI wants you to receive all cards in the game most of the cards it offers are cards you haven't collected so far which makes it hard to collect 3 copies especially of the rare cards.

The following cards are also found in the game but it is not yet confirmed to which pack they belong:

The number of total cards shown in the top bar is sadly not the number of different cards collected so far. It really means the total number of all cards you have. The other numbers in the sub categories only refer to the number of cards in your actually used deck.

You can sort cards (only ascending) by chosing sorting criterias one after another. The previous sortings are kept as far as possible. (i.e. sort by 1) name 2) DEF 3) ATK)

Sadly there is no useful sorting criteria for spells and traps beside "name".

You start the game with 120 random cards. The default Deck can be optimized right away with other cards in your trunk in most cases.

There are cards which are Limited or Semi-Limited. (for you but not for the opponents of higher level).

The speed of Gameplay is relatively slow but can be sped up by holding L while dueling or just hold L while choosing an opponent. 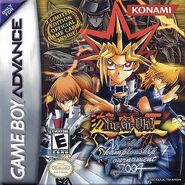 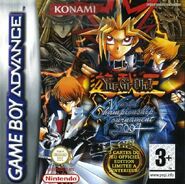 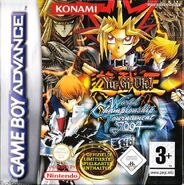 Japanese cover
*Disclosure: Some of the links above are affiliate links, meaning, at no additional cost to you, Fandom will earn a commission if you click through and make a purchase. Community content is available under CC-BY-SA unless otherwise noted.
Advertisement