Yu-Gi-Oh! The Sacred Cards known as Yu-Gi-Oh! Duel Monsters 7: The Duelcity Legend in Japan, is an RPG-style game for the Game Boy Advance.

The story of the game loosely followed the Battle City story arc of the anime and manga, with adjustments to allow the player to act the part of a major character and participate all the way into the Battle City Finals.

One important thing to note is that the game automatically cuts to the ending sequence immediately after the defeat of Marik Ishtar, with no option to save. Because of this, any money or rare cards earned in the final duel are irrelevant, and the player never has an opportunity to use The Winged Dragon of Ra without the use of a game-hacking device. The only way to do this normally is to allow Marik to Summon Ra and destroy it (or somehow discard it from the hand), then Special Summon it from the graveyard. Also noticeable that even in the English version of the game, most of the cards have their original OCG artworks like Soul of the Pure, Monster Reborn and Last Day of Witch.

A Konami 'cameo' in this game is the Miracle Moon music in the arcade, which is taken from the Beatmania series of games.

The game starts when the player and his two friends, Yugi Muto and Joey Wheeler are preparing for the Duel Monsters Battle City tournament. In order to win the tournament, the player must obtain six Locator Cards which are received after beating certain duelists. After all of the locators are obtained, the player is entered into the finals.

A mysterious person named Marik has a gang of card thieves, known as the Ghouls, which he is using to obtain the three Egyptian God Cards to bring the world to darkness. Marik's Rare Hunters eventually take over the whole city. Even the owner of the card shop works for Marik and tries to kill the player. Then, the player meets Ishizu Ishtar, who challenges them to a game of Duel Monsters, to see if he is strong enough to wield an Egyptian God Card. After she is beaten, the player must beat Seto Kaiba, the person that organized the tournament, in order to obtain the first God card.

After the player gets into the finals which take place on a blimp, he duels Marik. After Marik is beaten, it is found out that it was not really Marik. It was actually one of Marik's servants. The real Marik was the person the player met earlier in the game that became one of Yugi's friends: Namu. Then, Marik starts stealing the souls of those he beats. After Marik defeats Kaiba, the player must challenge Yugi. After Yugi is beaten, the player must face Marik. The game can't be saved after beaten so once the game is beaten, you will restart at the last save point.

The mechanics of this game are a much simplified version of the OCG/TCG rules. This game plays differently from the OCG/TCG, because it is based on the prototype rules that were originally being considered when the card game was first being transferred over from the manga.

The need for Polymerization to perform Fusion Summons is eliminated. Ritual Magic Cards require specific tributes (for example, if you activate Black Illusion Ritual, a Dark-Eyes Illusionist is needed). The effects of most cards are different (eg. Jinzo destroys traps rather than negating them). Some Effect Monsters are treated as Normals or vice versa (eg. Cyber Jar and Mystical Elf).

Some types of cards are different (e.g. Spellbinding Circle and Crush Card are magic). You can't fuse most monsters, so Fusion Monsters are treated as Normal/Effect Monsters. For example, Flame Swordsman is an Effect Monster. However, if a special ability allows it, you can still fuse certain monsters. For instance, Alpha, Beta and Gamma can fuse to form Valkyrion the Magna Warrior.

The Petit Moth line are unique, as they aren't treated as Effect Monsters, but they will evolve into their later stages of evolution at the start of each of the player's turns.

After an Equip Spell is equipped to a monster, the equip card doesn't stay face-up on the field. The card instead disappears and the monster permanently gains 500 ATK.

There is no Fusion Deck or Banished Zone.

Dueling partially resembles the real-life game mechanics, albeit with some elements that make it resemble Duelist Kingdom rules.

At the time of its release, Yu-Gi-Oh! The Sacred Cards featured 26 cards that did not have an OCG/TCG version.

Yu-Gi-Oh! The Sacred Cards received mediocre reviews with an average of 58% on Game Rankings. (1) It was criticized for its shortness. 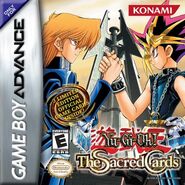 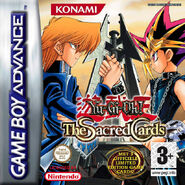 Español
*Disclosure: Some of the links above are affiliate links, meaning, at no additional cost to you, Fandom will earn a commission if you click through and make a purchase. Community content is available under CC-BY-SA unless otherwise noted.
Advertisement