Yu-Gi-Oh! The Eternal Duelist Soul is a video game for the Game Boy Advance. It is an English-language version of Yu-Gi-Oh! Duel Monsters 5 Expert 1.

A red, green, or black deck is automatically available at the start of the game. Opponents are arranged in "tiers", which are unlocked by defeating each opponent in the previous tier a certain number of times. Except for Tier 5, which has 4 duelists, each tier consists of 5 duelists.

There are 819 different cards in total. Cards are accessed from the Deck Edit menu and are stored in the Trunk (which can hold more than 10,000 cards). They can be transferred to the Main Deck or Side Deck. The Main Deck must contain 40-60 cards, but also allows up to an additional 20 cards in the Fusion Deck section. The Side Deck can hold up to 15 cards, which becomes available between certain special event duels, such as Weekend Duels.

An important aspect of the game is the in-game calendar. On certain days of the week, random events may occur, such as receiving a pack of cards in the mail or being challenged to a Match by an opponent. The calendar advances one day after each duel.

The Eternal Duelist Soul is nearly identical to Stairway to the Destined Duel, except there are fewer cards to choose from and the default animation speed is slower, though there is the option of holding the R button before the duel starts to permanently speed up that particular duel. It is also the first game to include Polymerization as an actual card.

Defeat all Tier 1 duelists 2 times each to unlock this tier.

Defeat all Tier 2 duelists 3 times each to unlock this tier.

Defeat all Tier 3 duelists 4 times each to unlock this tier.

Defeat all Tier 4 duelists 5 times each to unlock this tier.

By default, the Duel Computer is the only opponent readily available after advancing to Tier 5. The other three duelists are unlocked in the following ways:

While the Duel Computer claims that it is building a deck to counter yours, it uses the same deck every time you face it. Its strategy revolves around effects that hinder the opponent's strategy, which creates the illusion of the game deliberately countering the player's deck.

Pegasus is programmed to be able to see the player's hand and face-down cards. However, due to the game's limited AI, it has little impact on the game and is barely noticeable. Pegasus will not attack a face-down defense position monster that he cannot destroy, but he will not change his strategy in any other way.

There are 819 cards in total. The game follows the May 2002 Lists, which did not include Forbidden cards. Booster Packs can be obtained by advancing through 5 tiers of duelists. Some packs can only be unlocked after defeating an opponent a certain number of times.

Cards are kept in a Trunk where they can be accessed through the Deck Edit section of the Main Menu screen and may be placed in the Main Deck or Side Deck. Fusion cards can be added to the Main Deck and do not go towards the 40 card minimum.

This game follows the real OCG Booster Packs with some slight variations and different covers (in the Japanese version it uses the same real covers). However, some of the special packs don't, namely the Millenium Puzzle packs.

The following is a list of all the Booster Packs (and their real-life packs when applicable):

Recurring events take place throughout the game that reward cards through special "sets". Each event rewards 5 cards. The Weekly Yu-Gi-Oh! event occurs every Tuesday of the week and the Yu-Gi-Oh! Magazine occurs every 21st day of the month. The Rare Hunter set can only be accessed by winning a forced duel against one of the Tier 3 Rare Hunters (occurs every 1-2 in-game months). The Grandpa Cup takes place at the beginning of June and offers two special sets, one for the Qualifying Round and another for the Finals.

The National Championship rewards include non-game cards which are intended to be used as a qualification [Ticket] to advance through rounds leading up to the Finals.

As a bonus for buying this game, three previously unreleased Holofoil Rare cards are included. Though not immediately available in-game, they could have their passwords entered immediately.

Like many other Yu-Gi-Oh! games, it uses the 8-digit passwords printed on most cards to unlock new cards. Passwords can be found on the lower left-hand corner of actual physical Yu-Gi-Oh! cards. A password screen in the game allows these codes to be entered to unlock the digital versions of cards.

The player must not already have the card in his/her Trunk, Deck, Side Deck (or if the card isn't in this game), it will not go through and it will display an "ERROR" message. 63 cards do not allow passwords to be entered, including the Egyptian Gods.

Once you play Graverobber, set the card instead of immediately activating it. Once the card is set, activate it and you will not lose 2000 Life Points.

The CPU plays Spell Cards even when Imperial Order, which negates the effects of Spell Cards, is face-up on the field.

If you activate Prohibition, you can see all the cards available in this game, excluding the Egyptian God Cards though.

Sangan / Witch of the Black Forest

Have Sangan or Witch of the Black Forest in your graveyard and then bring it back with Call of the Haunted or Premature Burial, then destroy the monster with a card effect. When this happens it will activate a glitch that will activate Sangan or Witch's effect twice instead of once. This is a faster way to get Exodia cards to your hand.

Spear Cretin does not remove the card from your graveyard you target for special summon with its effect. No AI in the game can get past two Spear Cretin for this reason.

Eternal Duelist Soul supports up to 2 players in PvP or trading, provided each player has their own Game Boy Advance and their copy of Eternal Duelist Soul, and one Game Link Cable is required to connect the systems (the game is not compatible with the Wireless Link accessory for the GBA). 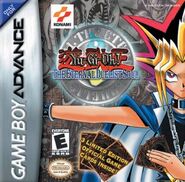 North American English cover
*Disclosure: Some of the links above are affiliate links, meaning, at no additional cost to you, Fandom will earn a commission if you click through and make a purchase. Community content is available under CC-BY-SA unless otherwise noted.
Advertisement