View source
watch 02:56
Raise a Floppa - The Loop
Do you like this video?
Play Sound
This article is about the internationally released game. For the Japan-exclusive game, see Yu-Gi-Oh! Duel Monsters II: Dark duel Stories.

Yu-Gi-Oh! Dark Duel Stories, released in Japan as Yu-Gi-Oh! Duel Monsters III: Tri-Holy God Advent (遊戯王デュエルモンスターズＩＩＩ  Yūgiō Dyueru Monsutāzu III Toraihōrīgoddo Adobanto), is a Game Boy Color video game and the third title in the Yu-Gi-Oh! Duel Monsters series of games. It was released in Japan on July 13, 2000, and it was the first Yu-Gi-Oh! video game to be released outside of Japan, with a United States release date of March 19, 2002.

Players of the game can trade and battle with other players using a link cable.

Players must beat each player in a stage five times, in order to get to the next stage. Once the player beats a character five times, he or she may continue to duel them for more points [see Passwords & More]. Here are the list of characters that a player may duel against:

The player's Starter Deck consists of the following 40 cards:[1]

Dark Duel Stories does not totally conform to the rules of the Official Card Game. This includes many cards having different effects, or having their effects removed altogether, including, but not limited to, Jirai Gumo; this means that some Monster cards with effects in the OCG may not have any effects at all in this game, whether positive or negative. Rather than having flip effects or passive effects like many cards in the OCG, most cards seem to only be able to activate their effects on the first turn they are played. Many cards seen only in this game (the 'Creatable' cards) also have Type and/or Attribute that do not match their appearance at all. While this can also be seen in the official card game, this happens much more often in this game.

During gameplay there is more than one way to win. A player may win by decreasing the opponent's life points to zero, forcing your opponent to run out of cards (have them unable to draw a card at the start of their turn), or by having all five pieces of Exodia in your hand.

In order to duel, a player's Deck must contain 40 cards and be under their current Duelist Level. If the Deck is over/under 40 cards or over the Deck limit cost, the player will not be able to duel until the error is fixed.

Here are some basic rules for playing:

In the game, players may notice a few different types of battle between monster cards.

In the game, players can go to the Password Mode option. There they can input an 8-digit password found at the bottom of each trading card (sold separately), saving the card into their chest. Players can add saved cards from their chest to their Deck, depending on how many points they have. The more points, the more stronger cards. You get points for winning battles, but you don't lose points for losing.

Téa Gardner also gives you 1 card for every duel that you win. If you type in a special password, Yugi's Grandpa will also appear and give you another card. Téa and Grandpa will also give the player one card part for each win as well. (see "Card Creation" for part information)

There are also hidden passwords that unlock the hidden bosses in STAGE 5 and the Credits. Since STAGE 5 can only have one duelist, once the player inputs a password for a STAGE 5 hidden boss (Yami Yugi, Yami Bakura, Nitemare, Marik, and Shadi), the previous boss in that stage is deleted. But, when you re-enter the password for deleted box, the records are the same (meaning deleted duelist just doesn't appear while there's another duelist in stage 5, but when you re-enter them their old scores reappear. So the data of your previous battles with them are saved and are not erased).

Note: Some cards will not be able to be added with the Password Option. Normally an incorrect password will simply not work, but entering certain card codes, like that of Graceful Charity, will have the game give the alternate message "Can't Record Password! Try a different password." The cards corresponding to these codes were released in the Trading Card Game at the time this video game was made, but were not actually included in Dark Duel Stories itself.

It has a unique feature: Players can create cards using different card parts, one for the upper half, and one for the lower half. You cannot make a card unless you have at least one top and one bottom half of a card. The player can also preview the created card before using up his/her parts. The only real catch is that the attack and defense can only go as high as 2000.

Since Polymerization is not included in this game, Fusions occur differently; selecting one card and placing it on top of another compatible card could result in a fusion for an entirely different monster.

These Fusions are Alignment-based and are reflected as such in the combination they create. For instance, fusing Thunder Kid with Yamatano Dragon Scroll would result in Thunder Dragon. Similarly, combining it with any number of Aqua monsters would normally result in Bolt Escargot. Also, combining Time Wizard with Baby Dragon would result in Thousand Dragon. 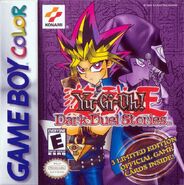 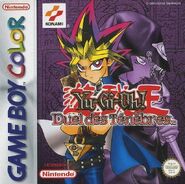