The game contains 3554 cards.[4] This includes Egyptian Gods, "Speed Spells", "Speed World 2" and alternate artworks. It includes cards from all cards from the OCG Booster Packs up to Absolute Powerforce, Duel Terminals up to Duel Terminal - Pulse of the Trishula!!, Structure Decks up to Structure Deck: Machiners Command, promotional packs up to Premium Pack 12, Limited Edition 17 and Extra Pack Volume 2 and promotional cards and including "Darklord Superbia", "Cyber Eltanin", "Archlord Kristya" and "Hundred-Eyes Dragon".

Turbo Duels have been updated to include "Speed World 2" and more "Speed Spell" variants of existing cards.[5] Racing mechanics have been enhanced to include obstacles, puzzles, hidden pathways and increased collection points.[4]

Story Mode contains a 3D map, where the players can interact with other characters and confront obstacles.[5]

Wi-Fi rankings allow players to track and compare their percentages with other players worldwide.[4] A different card can be downloaded from Wi-Fi each day.

The protagonist awakes from a mind-control pod overseen by Sayer. Though it is kept a secret from other members of Arcadia Movement, it is revealed that the protagonist is not actually a Psychic Duelist and is in fact a former member of The Enforcers. The player is then put inside a room with 2 Psychic Duelists named Okita and Liquid. The player then duels Okita to pass the time while the three wait for orders. After the duel, Sayer walks into the room and orders the player, Okita and Liquid to go to the Stadium where the Fortune Cup is being held.

The player then has to finish a Box Duel Puzzle to get to the entrance of the stadium, and there the player finds out that Akiza has lost her duel against Yusei Fudo. Sayer seems to be OK with the result, but Lazar wants to take Akiza from Sayer, for Rex Goodwin needs her. Sayer takes her back to the Arcadia movement and leaves Okita, Liquid and the player to deal with the guards and Lazar. After the duel, Lazar leaves. The player's allies leave. The player is about to leave when Carly sees the player and tries to get information out of them. The duel is prevented when the Crimson Dragon is summoned from to intense duel between Jack and Yusei. Carly and the player go to the arena and see the dragon. While Carly tries to get an interview, the player gets a flashback. The next day, the player is ordered to go to the west of the Arcadia Headquarters to complete their Duel training, which consists of 3 Duel Puzzles and 3 Structure Deck duels. After the Duel Training, the player is ordered to undergo Duel Runner Training. After the Duel Runner training, the player runs into Yusei, which seems to bring back ancient memories of a time where the player and Yusei were friends. Liquid takes the player back to the Headquarters, where the player has a flashback.

Blast from the Past - Old Memories, a Team's Bond

Main article: Blast from the Past: Old Memories, a Team's Bond

After defeating several different Duel Gangs and uniting most of Satellite under their control, Kalin lets the power go to his head, ostracizing his friends and saying that he now wishes to take on all the Securities. Shortly afterwards, Kalin is captured by the Securities and the Enforcers break up. The protagonist, who has a connection to the Spirit World similar to Luna's, is captured by Sayer and put through a brainwashing regiment.

The Meeting - The Spirit World and New Allies

Main article: The Meeting: The Spirit World and New Allies

Back in the present, as the brainwashing wears off, the protagonist's connection to the spirit world causes them to receive a distress call from the spirit of a mage, Torunka. As they sleep, they enter the Spirit World and has to navigate through a forest filled with Minus Staves that cause the Minus Curse, an effect that reverses natural phenomena. Torunka, formerly an elderly wizard but now trapped in the form of a child, helps the protagonist rescue Luna from the castle of Zeman the Ape King. Torunka gives the player his staff (which manifests in the waking world too), which allows them to escape the clutches of the Arcadia Movement along with Luna.

The Journey - An Old Encounter, the Escape and a New Menace

Main article: The Journey: An Old Encounter, the Escape and a New Menace

Sayer, attempting to recapture the player and Luna, as they are in the Arcadia Movement and are trying to escape, and stop Yusei, who is also in Arcadia Movement to rescue Akiza, is attacked by the Dark Signer version of Carly, who he killed moments before. Meanwhile, Akiza is assaulted by Dark Signer Misty. When the player discovers Akiza being assaulted by Misty, Sayer is seen falling from the top Deck of the Arcadia Movement, just like the anime. Then, outside of the building it shows Jack and Mina and Jack finds Carly's glasses on the ground.

All the main characters recover at Blister's hideout, while Blister asks the protagonist to deliver a package (this introduces the protagonist to the rest of the DAIMON area of the city). Not long after, their hideout is attacked by people wearing the Spider Mark of those under the control of the Dark Signers (specifically Roman). Afterwards, they are invited to Rex Goodwin's mansion, where Rex explains the destiny of the Signers and their enemies,the Dark Signers, who will use various towers erected around the Old Enerdy System in the B.A.D. Area to summon the King of the Underworld to destroy everything. It is postulated that the player character is the Fifth Signer due to their connection to the Spirit World, but this is denied by Rex Goodwin, who says that the fifth Signer already knows who he is and will reveal himself when the time is right.

The significance of being Signers is denied by several of the group, but it is revealed that their signature dragon cards are each keys that can be used to shut down the towers in the B.A.D. Area; Akiza's Black Rose Dragon, Yusei's Stardust Dragon, Jack's Red Dragon Archfiend, and Luna's stolen Ancient Fairy Dragon.

The next day, the Dark Signers issue their formal challenge to their respective rivals; Kalin, who wishes revenge upon Yusei for abandoning him to the Securities, Misty, who blames Akiza for her brother's death, and Carly, who wants revenge on Jack for leaving her. If they are not defeated and their towers in the Old Enerdy System sealed, the King of the Underworld will rise within 24 hours. Before heading off to stop them, Luna begs the protagonist to go to the Spirit World with her to free the spirit of the Ancient Fairy Dragon from Zeman the Ape King, which is needed to seal the fourth tower.

Upon arriving in the Spirit World, the player runs directly into the Ape King's castle and defeats him in a duel to free Ancient Fairy Dragon. With the Ancient Fairy Dragon free, Torunka returns the player and Luna to the human world, only to find Leo losing to Devack. The player and Luna duel Devack and defeat him, allowing Luna to seal the Enerdy System Tower. After Luna and Leo leave, Greiger appears in his Duel Runner. The player is required to defeat Greiger only after he summons his Earthbound Immortal. Upon victory, Greiger leaves, and the player races to Yusei and Kalin's location while dodging the attacks of Kalin's Earthbound Immortal. When the player reaches Yusei, the player duels Kalin, as Yusei's Duel Runner has broken down and he cannot duel. Kalin proposes that both players start with no cards in their hands, in an underhanded attempt to give himself an advantage with his Infernity cards. The player defeats Kalin, and Yusei seals the Enerdy System Tower.

After the duel, the Crimson Dragon teleports the main characters to Rex Goodwin's mansion. The player defeats Lazar to gain entry into the mansion. Once inside, Goodwin reveals himself as both a Dark Signer and later a Signer. The player must then catch up to him in a Duel Runner, defeat him in a duel along with Yusei, in a Turbo Duel. The Crimson Dragon then abandons Goodwin, and selects the player as the fifth Signer. The player then defeats Goodwin in one last duel, of which his Deck is at its toughest.

After the game, the player has become friends with Yusei and his group, abandoning all ties to the Arcadia Movement. Akiza has now become a Turbo Duelist.

The game includes characters from the anime, characters exclusive to the game[4] and a number of characters who debuted in Yu-Gi-Oh! 5D's World Championship 2009: Stardust Accelerator.

In the 5D's Story Mode, some duels have Special Rules, a condition that is applied to both players or one of them. The following Special Rules are applied:

The three promotional cards for this game are "Stygian Security", "Samurai Sword Baron" and "Stygian Sergeants".

These four cards are used by Trudge in the Yu-Gi-Oh! 5D's anime.[6]

In an attempt to solve some of the major bugs, there was a banlist that was available for download titled "World Championship List". Here's a list of the extra banned cards, with reasons as to why there were banned. 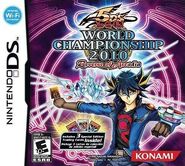 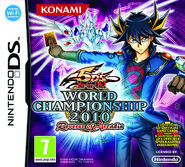 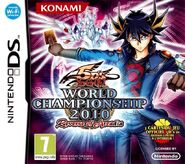 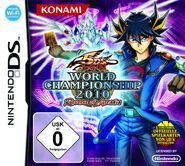 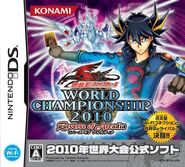 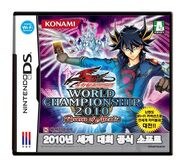