The game contains a story mode, where the player may duel, browse a 3D map, interact with other characters and collect items and cards.

There are 2887 cards featured in this game (including Egyptian Gods, Speed Spell - Wheelie Breaker and Speed World), going up to Crimson Crisis also includes cards from the first 4 Duel Terminals and cards from Structure Decks up to SD16, but excludes any TCG exclusive cards up to that date that are not already included in Extra Pack 01. The game also includes many promo cards, such as "Stardust Dragon/Assault Mode", "Shield Wing", "Elemental Hero Absolute Zero" and "Genesis Dragon". However, it misses 779 cards released in OCG before Lord of Magicians, mainly cards that rely on other specific cards, such as Ritual Spells or the ones that require a specific monster, like "Checkmate".

There is Wi-fi in this game where player's can play against each other, find upgrades and cards.

The player creates their own character. They choose their name, gender and appearance.

Story Mode includes the majority of characters from the first arc of the anime and a number of original characters. Additional character versions of cards can be unlocked as opponents and Tag Duelists in Free Duel mode.

The player wakes up in Satellite, stripped of their memory. They are found by Rally who duels them in the hopes it will help them regain their memory. Rally introduces them to his friends Blitz, Nervin and Tank and takes the player to their base in the Satellite underground.

The player finds a "Speed Spell" card in their Duel Disk, causing everyone to believe that they are a Turbo Duelist. Since Yusei and Sector Security are the only Turbo Duelists in Satellite, they figure the player is from the City.

Since a Turbo Duelist is not complete without their Duel Runner, Blitz arranges for the player to buy a Duel Runner from Kuroe. After discovering it has no engine or CPU, Blitz goes to confront Kuroe, but ends up getting kidnapped. The player then ventures to the thugs' lair, where they duel and defeat multiple thugs in order to free Blitz.

A group of securities, led by Officer Trudge appear outside the group's lair, accusing Rally of stealing the CPU. Since they were using the signal from Rally's criminal mark to trace their location, Blitz used Yusei's jamming device to block the signal. The group split-up; Rally, Nervin, Blitz and Tank go one way and advise the player to ride their Duel Runner to the Old Highway. The player races out past the Securities, prompting Trudge to chase them. After the player outruns Trudge, they come back to the hideout. The player is planning to escape through the pipeline just like Yusei did earlier in the game.

After beating a test simulation, the player gets a chance to escape to New Domino. As the player enters the pipeline, Trudge immediately follows in pursuit. After outrunning him, the player gets caught by Security and is taken to the detention center having their Duel Runner and Deck confiscated.

In jail, the player reaches the Recreation room where Bolt Tanner is. Tanner has just won a Duel, with his opponent lying on the floor. Tanner taunts the defeated duelist by calling his cards trash, and the player then attempts to defend the defeated duelist by dueling Tanner with his Deck (like Yusei uses Yanagi's Deck in the anime). After beating Tanner, the player notices Yusei also getting escorted to his cell, and then receives a challenge from Mr. Armstrong. So the player has to collect cards from the inmates to create a Deck and use it to beat him.

After beating Armstrong, Armstrong calls off the deal and orders the Securities to seize the player. However, he is interrupted when Rex Goodwin appears on the scene, firing Armstrong and eventually releasing the player into New Domino City. Tanner passes the player his Ushi Oni card, telling them to seek a bar named Bootleg. Showing the card will allow for the player to come into contact with an acquaintance.

Upon arriving at the Bootleg, the player shows the bartender Tanner's card, but the bartender requests that the player complete some of his Duel Puzzles, as he's a Duelist. After completing 3 Puzzles, the bartender tells the player to wait outside - and upon exiting the bar, they encounter Blister, who escorts them to his hideout.

Upon escape, the player encounters Yusei, who also has reclaimed his Duel Runner and Deck. They both make a break to whatever cover they could find. As the player escapes Trudge they are guided by Leo to a place where they could hide out for the time being. Leo introduces himself and Luna, and then challenges the player to a duel. Upon winning, the player gets let in on a secret: there is an underground duel arena.

At the duel arena, the player and the twins witness Akiza beat yet another duelist. While people flee from the arena, the player feels a stinging pain as they notice a birthmark appear on their arm. Akiza notices this mark and promptly challenges the player to a Duel. After the duel, the birthmark disappears.

Several days later, the player gets informed of a Tag-Team Duel Tournament as they make their way towards the Duel Runner Shop. They also get into a Tag Duel with the twins, with Blister as their temporary partner. After the player finds a partner, they proceed to the Duel Stadium where they proceed through the tournament, facing Figaro and Corse (this opponent team may vary between who's chosen as the Tag partner), Blister and Tanner, and finally Leo and Luna. After winning, the player runs into Goodwin, who congratulates the player for their victory.

Some time later, the player runs into Tanner outside the bar and receives an invitation to the Fortune Cup. They shows this to Blister to know more about it, and is told to go to the Neo Domino Highway so as to sign up for the preliminary race. After passing the preliminary race, the player is confronted by Bass who then shows them how to play a Turbo Duel. After that, the player is also informed of the Speed Spells being sold at the shop.

The player then proceeds to the Duel Stadium where they face off against Trudge, Hunter Pace, and Greiger in the three Turbo Duels of the preliminaries. Following this, the player proceeds into the latter half of the Fortune Cup, facing off against Gill Randsborg and Akiza in two ground duels, and squaring off with Yusei in a Turbo Duel.

Upon finishing the duel, the player is about to prepare for the final duel with Jack Atlas, when they black out. They receive several flashbacks, and they wake up at a temple for the People of the Stars. They are then confronted by Rex Goodwin. It is revealed to the player that he was the one who grafted the birthmark onto the player's arm, as Goodwin plans to utilize the power of the Crimson Dragon. Goodwin then pits the player against 4 other clones - Alpha, Beta, Gamma and Delta - and the player has to defeat all 4 of them without replenishing life points in between duels (You'll just have to do the match over again).

Upon victory, the Crimson Dragon appears, but then shortly dissipates. Goodwin then realizes that he cannot simply do with replicas, despite the fact that intense duels will lead to the awakening of the Crimson Dragon. The player then blacks out again, and finds themselves back in their room, before the final duel with Jack Atlas. After defeating Jack, the player receives the Stardust Dragon card for Yusei. Goodwin aborts his plan to awaken the Dragon, and allows the player to do as they wish. The player then passes Yusei the Stardust Dragon card, and also receives a Travel Permit, allowing them to travel between Satellite and New Domino City.

Post storyline, Yusei has a new Deck with "/Assault Mode" support, the name of which references the game title, XLerator.

You can also unlock opponents for Free Duel in World Championship Mode by advancing the plot or defeating opponents in Story Mode (5 times per opponent). Certain opponents can only be unlocked for accomplishing tasks like summoning a difficult-to-summon monster, or winning with a special victory condition. Note that they must be done in a regular Duel; Duel Puzzles don't count.

Acquiring enough opponents within a certain skill level will unlock Tournament Mode for a certain Level. In Tournament Mode, the player enters a 3-tier elimination tournament with 7 other randomly chosen available CPU opponents, and must defeat the three opponents they get matched up with in separate duels in order to win. Clearing Tournament levels are required to unlock certain opponents and packs.

Opponents that require special tasks to unlock are:

Tag Team opponents that require special tasks to unlock are:

Using DS Wireless Communications to connect with the Wii Game, Yu-Gi-Oh! 5D's Wheelie Breakers unlocks Speed Spell - Wheelie Breaker for use in Turbo Duels if you haven't obtained it yet.

Stardust Accelerator includes three promotional cards, which are used by Kalin in the Yu-Gi-Oh! 5D's anime (but are not in this game). These include: "Infernity Guardian", "Infernity Archfiend" and "Infernity Dwarf".

The Korean version of the game included 7 promotional cards; the said 3 along with the cards from Limited Edition 12; "Light End Dragon", "Dark End Dragon", "Chaos-End Master" and "Sphere of Chaos".

In the Stardust Accelerator game guide, "Infernity Destroyer" is the promo card given. 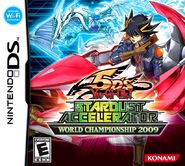 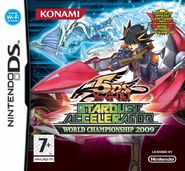 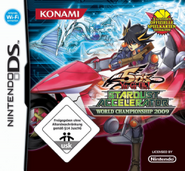 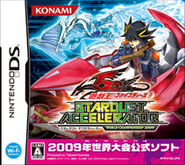 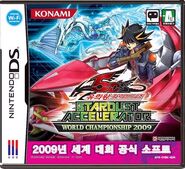