Yokai ( Yōkai) is a Type of Monster Card in the Yu-Gi-Oh! GX manga. They were used by Bastion Misawa and are based on Yōkai creatures from Japanese folklore.

When the Yokai-Type monsters were released in the TCG/OCG, they were changed to be Zombie-Type monsters, making Yokai a Type exclusive to the manga. 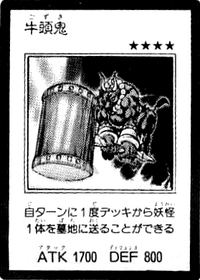