Yami Yugi is a video game depiction of Yami Yugi, a character from the Yu-Gi-Oh! anime.

As a partner, he is available in Yu-Gi-Oh! Duel Arena as a Legend Partner, with a default of 4 Rental Points. His partner ID is P002. As an opponent, he appears as Yami Yugi 1, Yami Yugi 2 and Yami Yugi 3 in Stage 1 of Quest mode, as well as himself in Duel Monsters Arena mode.

A dark personality of Yugi Muto that appeared after he completed the "Millennium Puzzle." Skilled in all games, he battles evil. He was victorious in Battle City, becoming the first "King of Games."

First things first, learn the basic rules and the flow of battle. Pay attention to the ATK and DEF values of each monster.

Learn how to play Spell cards with my deck! I'll show you my Ritual monsters that can be summoned by Ritual Spell cards!

It's time to Duel!

A Deck built around "Dark Magician", and featuring a large quota of High Level Monsters, including "Slifer the Sky Dragon". Aggressively aim for Special Summons of high level monsters, with a Fusion Summon of "Dark Paladin," and "Gorz the Emissary of Darkness" if you find yourself in a tight spot! 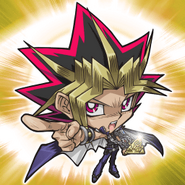 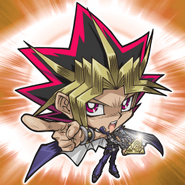 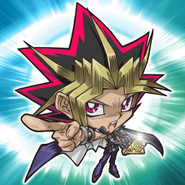 Yami Yugi 3
Add an image to this gallery

Introduction to Ritual and Spells
Monsters (27)

Soul of the King of Games
Monsters (23)

Retrieved from "https://yugioh.fandom.com/wiki/Yami_Yugi_(Duel_Arena)?oldid=4321883"
*Disclosure: Some of the links above are affiliate links, meaning, at no additional cost to you, Fandom will earn a commission if you click through and make a purchase. Community content is available under CC-BY-SA unless otherwise noted.
... more about "Yami Yugi (Duel Arena)"
RDF feed
DAR Deck
Soul of the King of Games +
English name
Yami Yugi +
Gender
Male +
Video game appearances
Yu-Gi-Oh! Duel Arena +