Yami Yugi, Joey Wheeler, Seto Kaiba and Yami Marik faced each other in a game of Duel Monsters, during the Battle City arc, in the Yu-Gi-Oh! anime. It is based on the same duel from the manga.

After the events of the Virtual World arc, which Seto Kaiba proclaimed never happened, the Semi-Finals of the Battle City Tournament can now begin. To determine turn order, the four semi-finalists, Yami Yugi, Joey Wheeler, Seto Kaiba and Yami Marik, will have a battle royale, to determine who will face who in the tournament. The rules were simple: the first two duelists to lose will face each other in the first match, while the last two will face each other in the second match.

Yami Marik has 1700 Life Points remaining and controls no cards.

The matchup for the semi-finals have been determined. Joey will face off against Yami Marik, while Yami Yugi and Seto Kaiba prepare for their rematch. 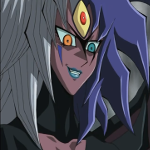 Categories
*Disclosure: Some of the links above are affiliate links, meaning, at no additional cost to you, Fandom will earn a commission if you click through and make a purchase. Community content is available under CC-BY-SA unless otherwise noted.