Yami Marik is a playable Legendary Duelist in Yu-Gi-Oh! Duel Links. This is a video game depiction of Yami Marik, a character from the Yu-Gi-Oh! anime.

Prior to August 15, 2018, he was exclusive to the special event Attack of the Rare Hunters! Yami Marik Returns!, only being able to be dueled or unlocked during the event.

Yellow Gate Keys are normally required to Duel Yami Marik at the Gate. During the special event, Map Fragments are required instead.

Yami Marik is Marik Ishtar's dark side created from the suffering he endured as a Gravekeeper. Cruel and vicious, he enjoys watching his opponents suffer. His appetite for destruction is incomprehensible. His "Lava Golem" can be summoned to the opponent's side of the field where it slowly puts the stranglehold on his foe.

After his defeat and destruction during the Battle City finals, Yami Marik awoke in the world of Duel Links with his powers restored and the Winged Dragon of Ra once again in his possession. Yami Marik soon realized that he could not feel the original Marik's presence and used the opportunity to wreak havoc on Duel Links with his army of Rare Hunters.

As Yami Marik and his Rare Hunters terrorized the virtual world, many duelists began to wonder how Yami Marik had returned and what became of Marik Ishtar. While Yami Marik did not know the answer to either question, he suspected that Kaiba had something to do with his revival. Kaiba would neither confirm nor deny this.

Eventually Yami Marik was defeated, which resulted in him not only losing his god card, but vanishing back into the Shadow Realm. The last thing that Yami Marik heard as he faded away was the true Marik bidding him to never return. 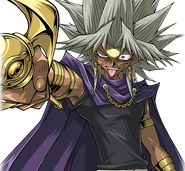 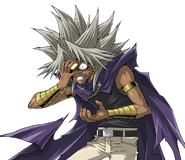 Event icon
Add an image to this gallery

Skill: "Incarnation: Sphere Mode" (Yami Marik starts the Duel with "The Winged Dragon of Ra - Sphere Mode" on his field.)

The following lists are the rewards the player accumulates from having Yami Marik reach a certain Level.

When dueling against Level 40 Yami Marik, these are the only cards that can drop; at lower levels, cards from the standard pool for Legendary Duelists may also drop. Super Rare cards do not drop at Level 10 or 20.

When dueling against Level 40 Yami Marik, these are the only cards that can drop; at lower levels, cards from the standard pool for Legendary Duelists may also drop.

Retrieved from "https://yugioh.fandom.com/wiki/Yami_Marik_(Duel_Links)?oldid=4238147"
*Disclosure: Some of the links above are affiliate links, meaning, at no additional cost to you, Fandom will earn a commission if you click through and make a purchase. Community content is available under CC-BY-SA unless otherwise noted.