When an Xyz Monster is Xyz Summoned, the monsters used for the Xyz Summon are stacked underneath the Summoned Xyz Monster. The attached Xyz Materials do not occupy a Zone.

Xyz Materials underneath Xyz Monsters do not count as monsters, so detached Xyz Materials will be sent to the Graveyard even if "Dimensional Fissure" is on the field. While monsters are acting as Xyz Materials, they cannot be targeted nor apply their effects.

In Yu-Gi-Oh! ZEXAL and Yu-Gi-Oh! ARC-V, as previously noted, Xyz Materials are instead called Overlay Units, and are depicted as orbs of light orbiting the body of the Xyz Monster, and glow with the color associated to the Xyz Monster's Attribute (e.g. LIGHT Xyz Monsters have yellow Overlay Units). Additionally, during an Xyz Summon, the cards to be used as Xyz Material light up with the color associated of their own Attribute before briefly spiraling around each other and entering a bright swirl of energy called Overlay Network.

Uniquely, the Xyz Materials of "CXyz" monsters and "Number C" monsters (alongside Number iC1000: Numeronius Numeronia) used by Barians are depicted as magenta crystals that float stationary in front of or behind the monster, often lined up in a row. These crystals contain white orbs of light. "Cxyz" materials are smaller with silver plates when not in a Barian area, and "Number C" materials are bigger with black trimmed gold plates. "Cxyz" materials become the latter when within a Barian area. These are named Chaos Overlay Units (abbreviated as "CORU").

In Yu-Gi-Oh! VRAINS, Xyz Materials are orange and are made of data. They now spin in a circle behind the monster's back.

In ZEXAL, when the player detaches Xyz Materials for their respective Xyz Monster's effect, the monster in question is shown to absorb them through several methods, such being eaten with their mouth or striking a weapon they carry. In some cases, the Xyz Monster will glow with the Attribute color for a few moments before unleashing the effect. When instead detached by another card's effect, the Units are drawn away from their orbit and dragged inside a purple Graveyard portal.

In ARC-V, Xyz Materials are still usually absorbed by the Xyz Monster, but sometimes they are instead flung in another direction. A recurring example is the anime effect of "Raidraptor - Rise Falcon", which allows it to gain the total ATK of all opponent monsters that were Special Summoned; to symbolize this, the used Material is sent flying towards the field of the other player(s). However, in general these animated effects tend to be much less elaborate than in ZEXAL, often simply causing the Material to disintegrate while still in its orbital path. In VRAINS, the Xyz Materials just disintegrate into data.

In the anime, some cards allowed monsters to be treated as more than 1 monster for an Xyz Summon (for example, Photon Caesar). This mechanic was most likely dropped for the TCG and OCG to avoid gameplay issues. The cards in question ended up as either Anime-only cards or had their effect changed to mimic this mechanic, usually by Special Summoning copies of themselves from hand or Deck. 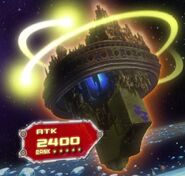