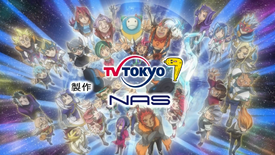 "Wonder Wings" ( , Wandā Wingusu) is the sixth and final Japanese opening theme of the Yu-Gi-Oh! ZEXAL anime, performed by Diamond☆Yukai. It debuted on October 6, 2013, and aired during episodes 124 to 145.

The single containing the full version was released November 13, 2013.

Taken by these Wonder Wings
Let's Take Off towards a radiant world
This Duel will decide our destiny
Come, show off your heart (cards)
These feelings of mine which words can't express
are showing off
We've always dreamed the same dream,
Next to you, right now
Oh, as we face each other
Let's create a new future with our Shining Draw
Taken by these Wonder Wings
Don't let go of your hands
Fly to the sky, further than the sun
Let's Take Off to the Future, towards a radiant world

NOTE: Some cards were added in later episodes to the opening.

Retrieved from "https://yugioh.fandom.com/wiki/Wonder_Wings?oldid=4360420"
*Disclosure: Some of the links above are affiliate links, meaning, at no additional cost to you, Fandom will earn a commission if you click through and make a purchase. Community content is available under CC-BY-SA unless otherwise noted.