Weevil's helper was a boy employed by Weevil Underwood to help him cheat in a Duel against Joey Wheeler.

Weevil promised the boy a rare card if he could sneak the card "Parasite Paracide" into Joey Wheeler's Deck. The boy claimed to be a fan collecting autographs from skilled Duelists. He then asked to hold Joey's Duel Disk and promptly ran away with it when Joey consented.

While being chased by Joey, the boy slipped the "Parasite Paracide" into Joey's Deck. He was caught by Joey's friend, Tristan Taylor, and explained that he took the Duel Disk to become a Duelist.

The boy met up with Weevil and told him that the plan was a success. Weevil gave him a common "Gokibore" card as compensation, making him protest that Weevil had promised him a rare card. In response, Weevil attacked him with a spider-shaped gun that shot silly string. 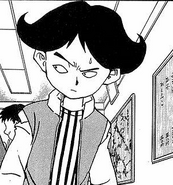 Haga's helper (manga)
*Disclosure: Some of the links above are affiliate links, meaning, at no additional cost to you, Fandom will earn a commission if you click through and make a purchase. Community content is available under CC-BY-SA unless otherwise noted.
... more about "Weevil's helper"
RDF feed
Anime appearances
Yu-Gi-Oh! (anime) +
Gender
Male +
Advertisement