watch 02:45
The Loop (Games)
Do you like this video?
Play Sound
For other version of this character, see Vellian Crowler (disambiguation).

Vellian Crowler, known in Japan as Cronos de Medici; sometimes spelled Chronos de Medici, is the head professor and department chair of techniques at Duel Academy. Initially scheming and underhanded in attempting to expel Jaden Yuki, Crowler grows throughout the series to appreciate all his students and in turn be respected for his noble actions. He was the main antagonist of the first half of the first season before the Shadow Riders debuted.

Crowler also hides a goiter hump that has an extra ear spouting near the nape, covered up purposely by his collar.

Crowler's character design was overseen by Kenichi Hara. His usual outfit consists of the a more regal variation on the standard Obelisk Blue uniform, complete with gold trimmings and ruffled pink collar, shoulders, upper chest, and sleeves. His blonde hair is sectioned in two layers, with the layer furthest from his face tightly-bound in a ponytail, and he also wears crescent-shaped earrings. He carries an Academy-issued Duel Disk known as a "Duel vest," worn horizontally across his torso, which has a motion sensor that automatically ejects cards from his Deck when he is ready to draw.

In the dub, Crowler has a vague British accent, though he still has an appreciation for Italian culture. His original counterpart speaks with a thick, almost stereotypical Italian accent, often yelling such phrases as "Mamma mia!", "Buongiorno," (even once saying "Parmesan cheese" ), adressing other people with "Signore" (male) or "Signora" (female) and ending the majority of his sentences with "(na) no ne" ("is it not so?"). He uses the personal pronoun "watakushi".

He has the tendency to talk out loud to himself while walking.

Crowler's clothing and hair have led many to call him "Miss" in the dub (though Jaden first thought Crowler was some kind of "academy mascot" when they first met, annoying Crowler as Jaden laughed). Whenever someone tries to figure out Crowler's gender, he gets angry and prefers to be called "Doctor," claiming to have a "Ph.D in dueling". He dislikes Lyman Banner's cat, Pharaoh, as he hates cats. He is much more respected by his students (including Jaden) in the Japanese version.

He calls Slifer students, Jaden in particular, "Slifer Slackers" in the dub, while in the original, Cronos calls Osiris students "Dropout boys". Despite this he is capable of being a fair person which is shown when he passes Chumley for excellent dueling even though he lost. Even though he often claims he doesn't really care about his students that much, he has had his genuine caring moments towards them, even Jaden. This particularly shows in his speech he gives to his students before he loses his soul to Camula and when he has a rematch with Jaden where he admits he doesn't want to see his students go.

His name in the Japanese version is derived from the names of Chronos, the personification of time in Greek mythology, and the Medici family, an Italian noble family who ruled Florence and Tuscany during the Renaissance period.

Vellian Crowler is a professor of the Obelisk Blue dormitory at Duel Academy. His main goal in the first year is to force low-performing students out of the school. After Jaden Yuki defeats him in a Duel, he tries as hard as he can to get Jaden kicked out of the Duel Academy, but fails miserably. Notable schemes include making Chazz Princeton Duel Jaden with "unbeatable combos," and placing a fake love letter in Syrus Truesdale's locker (which he mistook for Jaden's) to catch him peeping in the girl's bathing facility. Other schemes include Crowler hiring a hit-man named Titan to frighten Jaden and his friends out of Duel Academy, hiring the Paradox Brothers to Duel Jaden and Syrus in a tag-team Duel in hopes they will be defeated and get expelled, having Jaden go out after hours to Duel against the "Duel Giant" (knowing Jaden can be expelled if he's caught), and getting Belowski to Duel Jaden to convince him to run out. After Jaden beats Chazz in the school duel and seeing him defending Chazz from his brothers, Crowler starts to think that Jaden isn't all that bad and gives up trying to expel him (although before he did say that Slade Princeton and Jagger Princeton could be useful to mess up Jaden).

Crowler is chosen as one of the seven people that guard the Spirit Keys from the Shadow Riders in an attempt to prevent the resurrection of the Sacred Beasts. He Duels the second of the Shadow Riders, Camula, but is ultimately defeated and turned in to a doll. He is restored when Jaden defeats Camula and watches his students beat the rest. At the end of the first year, he Duels Chumley Huffington, with him agreeing to offer his recommendation to Industrial Illusions should Chumley defeat him. Though Crowler wins the Duel, he allows Chumley to pursue his dream of becoming a card designer due to his vast improvement in practical Dueling. Later he watches Zane and Jadens graduation duel which ends in a tie causing him to gain new respect for Jaden.

During the second year, while Chancellor Sheppard is away, Crowler takes over his position at Duel Academy alongside Vice-Chancellor Jean-Louis Bonaparte. For much of the season, the two devise schemes to market Duel Academy, but often argue over what methods should be employed to do so. Bonaparte resorts commonly to attacks, physical or otherwise, on Slifer Red, which he sees as a stain on the school's image, prompting Crowler to step in and defend the dorm on multiple occasions. In the Japanese version, Bonaparte addresses Crowler as a "temporary principal" to insult his feigning position. The two eventually duel to determine the fate of the Slifer Red dorm. Although Bonaparte proves to be a strong duelist, Crowler eventually wins. When the Genex Tournament is going on, he and Bonaparte watch Orlando Duel Jaden. They are huge fans of his.

After Sheppard returns to his duties, Crowler and Bonaparte, thinking themselves to be fired on account of one of the Chancellor's angry outbursts over their bickering, attempt to find new jobs with Industrial Illusions. Maximillion Pegasus agrees to open discussions on the matter, provided they can defeat him in a triangle Duel. Although they lose to Pegasus, Sheppard states that it was all a big misunderstanding, and that they were never fired in the first place.

By the third year, Crowler has grown to respect Jaden a bit and even comments that "Jaden usually saves them" when things go wrong. Crowler becomes another zombified victim in the different dimension along with Axel Brodie's entire "Blue Berets" group that he had used to combat the Duel Ghouls. However, he does not Duel when Jaden and his friends return to the different dimension to find Jesse Anderson. Because he did not Duel and was not sent to another alternate dimension, Crowler was present to watch Jaden's Duel against Yubel, who was possessing Jesse, along with Syrus and Ojama Yellow.

Crowler ascends to the position of vice-principal of Duel Academy in the fourth season after Bonaparte quits. Along with being a professor and vice-principal, Crowler is also revealed to be a career adviser. As Jaden's graduation nears, he reverts to the cruel and bitter personality he had in the first year, making his students do math problems and even having them spend entire classes doing pushups. When he wouldn't show up to his lessons, the students chased him around to school to know why he acted so odd. He revealed to them that he didn't want any of them to leave, and thus wanted them to not take enough classes to graduate. Jaden Duels him, and Crowler fights back brilliantly (even pushing Jaden into a corner multiple times) but is defeated by Jaden in the same manner he did during the entrance exams (causing Crowler to joke that using "Elemental Hero Flame Wingman" in conjunction with "Skyscraper" is the only strategy Jaden knows). This act restores Crowler to his usual self, leading him to make Jaden make up for all the classes he had missed recently. It is assumed that Crowler, along with everyone else, was pulled into the world of Darkness during the Trueman siege and brought back when Jaden defeated Nightshroud.

He was last seen trying to make a speech to the third-years, but broke down and cried violently before being carried out by the other staff members. Afterward, he attended the graduation party with his students.

In the Yu-Gi-Oh! GX manga, Crowler performs in the same manner he did in the first season of the anime, although he never Duels. 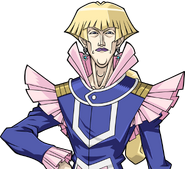 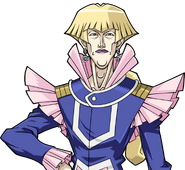 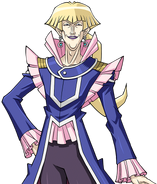 Crowler uses an "Ancient Gear" Deck, mainly focusing his tactics on summoning his signature "Ancient Gear Golem" cards as fast as possible through methods such as "The Trojan Horse" and a combination of "Statue of the Wicked" and "Heavy Storm".