THIS PAGE IS AN ARCHIVE AND WILL NO LONGER BE UPDATED! PLEASE GO TO MY TALK PAGE TO LEAVE ANY MESSAGES.

Hey Winter, I play 2008 for the DS and i need help with the tagduel world. Specifically i need to find a way to defeat harpie queen, the brainwashing challenge (where i have no control over the duel) and maybe some tips for tag duels in general. Any hints?Pikazilla (talk • contribs) 01:11, January 13, 2014 (UTC)

Hi Winter. I believe someone recently posted a pornographic image somewhere on the wiki. I'm not an admin so that's why i'm reporting it to you.Pikazilla (talk • contribs) 00:37, January 19, 2014 (UTC)

Re: The recently blocked RampagingTengu

How much do you want to be they're a sock? I'm not sure if this is concrete enough to warrant an extension of the one-month ban, but the similar names might be a connection worth looking into at the least. Lord Grammaticus (talk • contribs) 13:06, January 19, 2014 (UTC)

Sorry to bother you again but i don't know anyone else who plays this game. So I did the hyper venom requirement and am able to duel the Vennominaga stone tablet but when i won the duel it said i failed. How do I win? Do I have to do the entire Vennominaga Hyper Venom win AGAIN against Vennominaga (character) herself?Pikazilla (talk • contribs) 15:53, January 21, 2014 (UTC)

No, but thanks for the tips. I like to take my time on this, since I can easily regret the images that I uploaded. WinterNightmare (talk • contribs) 00:23, February 8, 2014 (UTC)

You should also try to include licensing for the images you upload. Do you remember what episode this image is from? I want to get a better dub image. By adding the licensing, a person viewing your images' pages would know automatically where you got them from. --Golden Key (talk • contribs) 01:43, February 8, 2014 (UTC)

War of the Giants Reinforcements OR Round 2

lord of magician is the only ocg structure deck that is released in Asian English. thus there is an official English name, which is also called spellcaster's command same as the tcg. that is the reason I moved it in the first place. -Lpoi (talk • contribs) 00:24, March 2, 2014 (UTC)

I really thought that roman numbers shouldn't be on the dub titles on the Zexal series, but I didn't realize I might be corrupting the pages. I guess I want to apologize for that... I should've left those titles alone... I really don't want to mess with the FCC. Scarboot198 (talk • contribs) 01:45, March 6, 2014 (UTC)

I'm unsure what your page is about, but the Japanese phrases of "Destiny End Dragoon" and "Magic Cylinder" are the same. Of course, you may already know that, I'm just pointing that out. --UltimateKuriboh (talk • contribs) 06:48, March 8, 2014 (UTC)

JSYK, Funneguy54321 is vandalizing a bunch of pages.

I'm new dunno how to PM, is this right?

Hello W.Nightmare: Here on wikia this monster appears with no Type and no Attribute. But i play the ygopro game and there it appears as an DARK Rock Monster. Would it be acceptable to change it here too? http://yugioh.wikia.com/wiki/The_Despair_Uranus --OnePiece (talk • contribs) 04:37, March 22, 2014 (UTC)

The Eye Of Timaeus

Hi, I saw that you uploaded the "Pendulum Summon Chart" but can I ask you: where do you found it? Maybe some Japanese Official website? or maybe some other Official PDF (like the official and new rulebook)? I'm really interested in having the source (I'm a proxy creator ^^) Thank you so much for the help --EagleOne984 (talk • contribs) 10:36, March 28, 2014 (UTC)

Divine Spirit of The ice barrier an zombie counterpart?

Thnaks by taking the blame of the zombies to me. Now something else crosses my mind. Are the Evil Swarm also treated as DARK counterparts too? --OnePiece (talk • contribs) 19:07, March 30, 2014 (UTC)

Perhaps you could fix this? Due to ARC-V being released, it is strange the template used on main page lists the 2nd episode instead of the 1st one. Tried to see what can be done, but no luck. Energy X ∞ 22:58, April 5, 2014 (UTC)

Found DM episodes made by Renrei00

I found a place where the episodes you have been using are being put up for download. It is neoarkcradle.net. In order to get there, you need to register there first. After that, you need to head for the - Astral-Union DVD-Rips DM - recovery page in order to get to where the episodes are. It should be a list from 1 to 224. You need to download it and make sure you have a video player like div player to play the video. This link is only for the DM episodes. However the website I mentioned has the other series episodes there in raw and subtitles. Once you find this and test it out, I will need a DM image of "Lava Golem" in hologram form.Cardsknower (talk • contribs) 01:43, April 7, 2014 (UTC)

Deletion of a page

I saw this card here these days and the image seems to be cuted off in the half. This new image would be better, right? 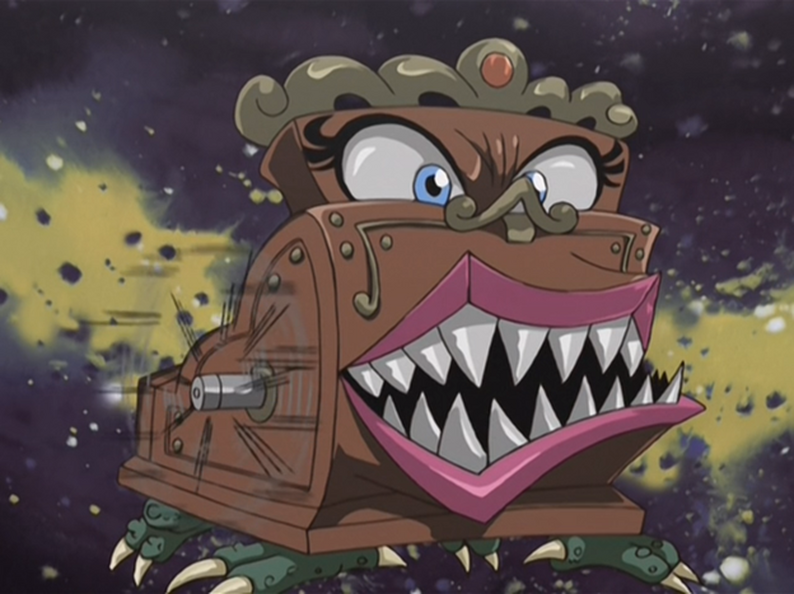 If it's not any trouble, could you upload the images of Chronomancy and Astromancy Magician from the TV Tokyo Duel School? I have a collection of anime images and I'd like to have them on this site. Numberc17 (talk • contribs) 19:00, April 13, 2014 (UTC)

Sorry, but I rather wait for another images where both Magicians have their Pendulum and Monster effect in one image. WinterNightmare (talk • contribs) 23:19, April 18, 2014 (UTC)

Monster Register thanks and Wightmare

Thnaks for the first's answer. Now i have a doubt.In the Artwork of Wightmare a big shadow appears after it. Is it a already existing monster? --OnePiece (talk • contribs) 11:21, April 14, 2014 (UTC)

Hi, Winter. I know this question may be disturbing, but let me ask you this: even though Nash's death wasn't caused by Don Thousand's influence in his past life, how come it wasn't revealed? Scarboot198 (talk • contribs) 02:27, May 25, 2014 (UTC)

It's true that he calls it a "Minus Tuner monster", and says that he is "Minus Tuning" rather than "Dark Tuning", but it's exactly the same as their anime counterparts, I don't think we should create a new article or anything, just mentioning it in the Dark Tuner monster's article like I did should be enough in my opinion. Rex never says "Minus" or "Dark Synchro Summon" though, he only says he "Minus Tunes" his monsters, goes summon chant and says Ultimaya's name. But anyway, "Dark", "Minus", they are just different names for the same thing (why Hikokubo is using different names is beyond me though). LegendaryAsariUgetsu (talk • contribs) 21:59, July 8, 2014 (UTC)

Have there been closed captions for the English dub of Yu-Gi-Oh! Zexal Episode 101 and if so, can you check them? Did they refer to the blue Battle Ox as "Battle Ox", "Minotaurus", something else or not mention a name? -- Deltaneos (talk) 21:54, September 13, 2014 (UTC)

Are you sure the action field doesn't appear in epsiode 25? The floating cubes in the background indicate the presence of this action field. [1] -- The Talk Goblin 18:07, September 28, 2014 (UTC)

That is an actual errata, as the text come from Duelist Edition Volume 1, the reprint version of this card. WinterNightmare (talk • contribs) 22:19, October 28, 2014 (UTC)

Are there any English cards with "Monarch" in their names that are not qualified as part of the new JP archetype mentioned in "Grudge of the Monarchs"? If not, then that archetype should be called "Monarch" because of "The First Monarch" (since the TCG will call it that). --UltimateKuriboh (talk • contribs) 06:04, November 13, 2014 (UTC)

Yes, there is already 14 cards that are not apart of the new archetype, which is all of the "Monarch" monsters, since this archetype focus on the Spell and Trap Card area. The difference is that it "Monarchs" (Teiō), not "Monarch" (Tei). You may be right, unless they decide in the last minute to change the name of "The First Monarch" to "The First Monarchs" or give it an archetype condition. Also, another possibles is that will it mention this card which can be searched from it. The reason for the archetype to be call "Monarchs" is that it was introduced in Cosmo Blazar, then Legacy of the Valiant introduced "The First Monarch", but the time between these two sets, already three cards are name "Monarchs". Also, if they decide to change the name "Monarchs" to "Monarch", then we merge the two together, but at the cost of losing the "Monarch" from being apart of the archetype and either placed it in the related area. The problem that this will create is the rearrangement of information since we need to focus on how the Spell and Trap Card work on the "Monarch" monsters or Tribute Summoned monsters. I don't think people will take kindly with the lost of the "Monarch" monsters section and just create the "Monarch (series)" to replace the lost. Again it just 1 card that can be change with 1 letter. WinterNightmare (talk • contribs) 16:52, November 13, 2014 (UTC)

Retrieved from "https://yugioh.fandom.com/wiki/User_talk:WinterNightmare/Archive004?oldid=4070896"
Community content is available under CC-BY-SA unless otherwise noted.