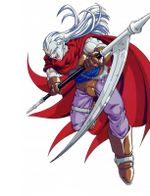 Your opinion is important, please give your support or opposition about the Yu-Gi-Oh! Wikia joining the Wikia ACG here. --Tyrant Slayer (Contribs) 21:15, 28 January 2008 (UTC)

Hey I know you

The Neos Deck on my page

It's just a prototype right now I'll fine tune the deck in time but I would like suggestions for it. Please keep this in mind with your suggestions anyone, The deck is meant to be semi serious. I just want it to be able to use all the Neos related fusions mostly and Neos Wiseman Which will be on the side deck with Yubel and Mystic Tomato.

Note : I do have most of the cards in the lists of cards on the page.

Suggestions for the deck I would like to get through my e-mail so please use the e-mail feature to send me an e-mail regarding my deck.

I'll tell you, but you won't like the answer.

I wasn't going to be upset about it's attack not being infinite, But I was confused as to what happens when two of them are out plus more D - Heroes. I honestly think it needs an errata where it says other Destiny Heroes except another Dreadmaster. Atleast both of them would have the attack of other D - Heroes.

Alright discuss strategies and other fun things any of you can notice/figure out with the deck.

Please remember to keep it the way I asked in this discussion.

Alright here are somethings I notice myself.

I can't really think of anything else strategy wise for the deck. Anyone else care to say anything towards a just for fun deck?

Can't do what to you now? Yeah Del is still here he and I still don't get along, Fox is unable to get on IRC too because he doesn't have net at his home, hasn't for a while, Also if you have the ability to use instant messengers give me an SN for one of those and I can still talk to you on those. And yeah this place changed a lot. Also it sucks that you cant get back on IRC. Seems like you have tried to connect to the IRC room before? Do you still have anything to do with Yugioh even while being in college?Trygon 18:14, September 18, 2009 (UTC)

Tommorow I'll be at the store, the one at Zephryhills. I might see you there if you go there on weekends. AND BY TOMMOROW I MEAN SATURDAY. --TehBazzard here! 07:38, December 12, 2009 (UTC)

You asked" "If you control an equipped Gilfer and send it to the grave with Chevalier's effect, can you destroy a card your opponent controls and also re-equip Gilfer if there is a legal target to equip it to?"

Retrieved from "https://yugioh.fandom.com/wiki/User_talk:Trygon?oldid=1208299"
Community content is available under CC-BY-SA unless otherwise noted.