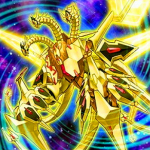 Hi and welcome to the Yu-Gi-Oh! wiki! Thank you for your edit to the Yuya's pendant page.

Well, they used to be worded similarly to that style, and shouldn't they be written that way so that readers would know how those cards would (technically) work? We may not know the full anime effects, but the known ones should be written to be as close to the gameplay style as possible. TheNeoTachyonDragon1007 (talk • contribs) 19:46, April 9, 2014 (UTC)

No, absolutely not. Because we don't know how they technically work. The dragons break game mechanics on scale never seen before or again in the anime. They do not work similarly to real cards. At all. Cheesedude (talk • contribs) 00:51, April 10, 2014 (UTC)

Well then, after they are released, should the anime effects be rewritten to resemble the official gameplay style, if there is any resemblance to the effects of the corresponding released versions? TheNeoTachyonDragon1007 (talk • contribs) 00:56, April 10, 2014 (UTC)

Retrieved from "https://yugioh.fandom.com/wiki/User_talk:TheNeoTachyonDragon1007?oldid=2834475"
*Disclosure: Some of the links above are affiliate links, meaning, at no additional cost to you, Fandom will earn a commission if you click through and make a purchase. Community content is available under CC-BY-SA unless otherwise noted.