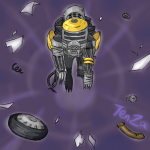 I see. I've removed the "Earthbound Linewalker" stuff. The "Kaibaman" stuff is valid though. If you're referring to the one that says it's based on Kaiba. It is a fact that it is based on Kaiba, not an assumption. The one about it being rumoured to be created by Kaiba in the anime, is an official rumour in the anime. It's something Chazz said. It's not something a fan is guessing. -- Deltaneos (talk) 14:21, June 26, 2010 (UTC)

Retrieved from "https://yugioh.fandom.com/wiki/User_talk:TenZa?oldid=1650735"
Community content is available under CC-BY-SA unless otherwise noted.