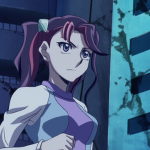 Please stop re-adding that Relationship section unless you are also going to reference it. We have two episodes and a small amount of prerelease info to work with and none of it indicates anything you wrote. Obviously, the two are going to have more interactions in the series eventually - at which point there will then be enough info to develop that section. It doesn't need to be there yet, there is not enough info to work with. Cheesedude (talk • contribs) 09:24, May 19, 2017 (UTC)

If you add a voice actor to an article, please add a source when you do. Your incorrect voice actor for Allen was called out by Matt Shipman. If you don't have a source, you shouldn't be adding the voice actor in the first place. --SnorlaxMonster 08:19, August 24, 2017 (UTC)

Based on this Wikipedia edit, you had reason to believe the voice actors and dub names were fake. Due to your severe lack of judgment in ensuring information was accurate before adding it to the wiki, I have blocked you for one month. When you return, you must not add dub names or voice actors unless you provide a source (ideally in the article itself); failure to do so will result in a longer block. --SnorlaxMonster 12:16, August 24, 2017 (UTC)

Retrieved from "https://yugioh.fandom.com/wiki/User_talk:Saeryukgkj?oldid=4034933"
*Disclosure: Some of the links above are affiliate links, meaning, at no additional cost to you, Fandom will earn a commission if you click through and make a purchase. Community content is available under CC-BY-SA unless otherwise noted.