When I clicked to create the page, it said it was previously deleted, and your name was linked to it. Another person's name was also linked, but yours was first so I just went for that. LordSchmee (talk • contribs) 19:59, September 14, 2011 (UTC)

You should probably ask at the community discussion forum to see how well other editors agree or disagree with the merges. You could ask on the cards' talk pages either, but the forum is more likely to get a response. -- Deltaneos (talk) 23:12, January 14, 2011 (UTC)

Why delete the page? I've seen the manga scans and it is exactly as it was =/

Were you suggesting before that Nitemare might be the true form rather than DarkNite? I think that might have been right. A lot of Japanese sites are calling DarkNite "カード魔神" (Card Majin) and Nitemare "カード魔神・真の姿" (Card Majin - True form). -- Deltaneos (talk) 14:56, January 31, 2011 (UTC)

my image of "this booster dont have image"

Hello, why you delete my image "this booster dont have image"? Maybe i must erase the image's place instead?

Your userpage says you specialize in monster images. I uploaded Japanese manga images for LADD and WK a while back, but they aren't really cropped that well (oddly, I had a hard time finding scans of chapters where the whole card is shown clearly). Do you think you could find better images? I usually wouldn't care that much (if my recent uploads are any evidence), but those card images end up a on a lot of pages when I do chapter card galleries, and they look sort of out of place. Thanks for any response. Cheesedude (talk • contribs) 00:13, February 26, 2011 (UTC)

I have received a copy of WC11, and I've found some differences in card names. Card names in WC10 were the official TCG card names as well, so I guess same thing happens with this one. Would you mind moving some cards or letting me do it? Examples:

Are you trying to access from Wikia's gateway (irc.wikia.com)? That has been blocked by Freenode, so you'll either need to use webchat.freenode.net (which is currently down) or a desktop client, like mIRC or Chatzilla. -- Deltaneos (talk) 15:16, March 4, 2011 (UTC)

I was leaving this message for III just as I got your message. I saw the Janime forum and I trust it. I'm just seeing if we can get some more solid proof to include in the articles, not that we'll have many people doubting the names. 'Also asked III about Bruno's name being Johnny, since that's something readers will want more proof for. -- Deltaneos (talk) 21:56, March 27, 2011 (UTC)

Re: Some things I wanted to ask you about

I don't like them having articles either. I suggested their deletion here before. Some unofficial stuff that's very popular is notable. e.g. Yu-Gi-Oh: The Abridged Series. Unofficial stuff that very few people know about isn't. e.g. a certain Microsoft Paint YouTube Yu-Gi-Oh! series. I would put those hoax cards in the second category. I guess when they were announced to be fake, TwoTailedFox overestimated how important they were. They might deserve one article for the hoax itself, but an article for each card, I certainly think is overdoing it.

I don't especially like the "Underworld Token" article... or the "Magical Hat Token" one. The manga effects for "Underworld Dragon Dragonecro" and "Magical Hats" didn't mention Tokens at all. The Tokens were just made-up to try and create a real world explanation of their effects. In its defence, Tokens and Extra Deck are the best real world explanation for monsters that seemingly come out of nowhere and this isn't an Extra Deck case. If we are to have an article for the "Underworld Token", I'd at least call it a "Dark Soul Token".

"Mighty Warrior: Dark Soul" isn't technically a card, but the name is at least official. Like the Legendary Dragon combinations, it's not exactly explained what it is and there is a potential "Dark Soul" counterpart of every monster. Unlike the Legendary Dragon combinations, the difference between how each original monster relates to the "Dark Soul" version is trivial, so I can see why it might not be worth an article. I won't object if you want to merge it into Card Appearances:Underworld Dragon Dragonecro (and maybe Card Appearances:Mighty Warrior).

The more websites and subtitles I check, the more different accounts of exactly what happens in Toei's episode 2, I find. Do you know for definite:

On a related note, I think Tetsuo might be an anime version of the convict from the manga. Visually Tetsuo looks more like him, than Jiro, especially in terms of their hair. (manga convict, Tetsou). Although Jiro is more like him in terms of role. Maybe they're considered to be two different characters based on the same manga character. So we should have three articles; the manga character and the two anime characters? -- Deltaneos (talk) 02:07, June 19, 2011 (UTC)

I would like to know that too the image you keep reverting to is clearly inferior. Glittersword Talk • Contributions 02:59, July 7, 2011 (UTC)

Not my Images. However, that being said - They do have Black Backgrounds so they would tend to be dark and a little blurry is better that unreadable which is what that other image is. There is no comparison. Either of the other images are better than the one you keep going back to.

Why did you delete my page? who the hell are you?

Rod is an admin, and he deleted your page because you posted it to articlespace; personal decks should be posted in your userspace. I went ahead and undeleted the page and moved it to User:MysticalBeastOfYubel for you. 「ダイノガイ千？！」? · ☎ Dinoguy1000 01:52, July 20, 2011 (UTC)

What do you mean fan-made? 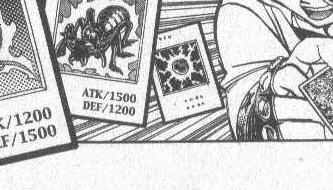 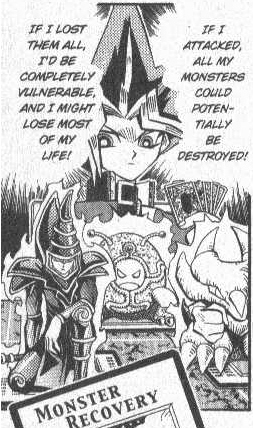 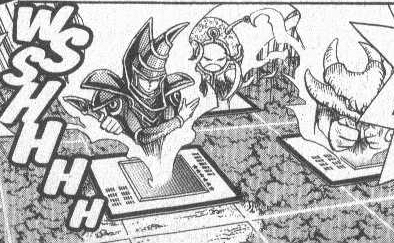 Here you go more unnamed monsters, I don't know what your plan is for these monsters, but whatever it is, I will help. WinterNightmare (talk • contribs) 2:03, August 13, 2011 (UTC)

That one-eye monster came from the duel between Yugi and Ventriloquist of the Dead. I red the manga, it said that he stole Kaiba's deck, so I believe it is part of his deck. I using online manga for help, if it not allow then I will go back uploading Anime artwork. There is a lot of manga artwork that need to be upload, if I can't used online manga then someone maybe a another year will take my place and upload the manga artwork. WinterNightmare (talk • contribs) 2:27, August 13, 2011 (UTC)

Darn, it scanlation and that mean I can't continue it. I will just go back to Anime artwork, but if you want I can upload unnamed monster despite the image policy. WinterNightmare (talk • contribs) 3:54, August 13, 2011 (UTC)

I red the image policy and it doesn't mention anything about scanlation, but I could be wrong. WinterNightmare (talk • contribs) 4:13, August 13, 2011 (UTC)

I guess you are right, but if I found the manga in japanese, can I upload the manga artwork, since it is the original. It won't be fan-made and I can upload anytime anywhere. WinterNightmare (talk • contribs) 4:39, August 13, 2011 (UTC)

If you see, Skystarray is a bad card (600 ATK is too weak to do anything. Even another user said this in this forum). And Aero Shark does too little damage to be useful; Cards that do little damage and are of limited usage are bad. Samurai BruxoDiscussão/Talk 18:10, August 29, 2011 (UTC)

Hello, Rodtheanimegod4ever. You have new messages at Deltaneos' talk page. ('Will probably be on Archive 46 later)
Message added 23:55 September 8, 2011 (UTC). Feel free to remove this notice if you wish.

Why did you remove this as a card type? It would've made it very easy to check through for cards like this. Not just Unity/Yu-Jo/Judgement of the Pharaoh, but also cards like Kaibaman, the Grave Robbers, and such. It's good for collectors and frankly I don't see why you'd remove such a useful page. :S Kinda annoys me when a wikia page, which is supposed to be a place I can find all knowledge about a certain subject, won't make pages or delete pages just because people aren't updating them. :/ LordSchmee (talk • contribs) 13:23, September 14, 2011 (UTC)

Retrieved from "https://yugioh.fandom.com/wiki/User_talk:Rodtheanimegod4ever?oldid=1608104"
Community content is available under CC-BY-SA unless otherwise noted.