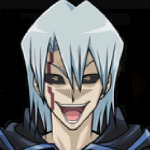 My User Talk Page huh? Okay, I'll be posting my decks, their details&ratings through Forum:Index. I accept anyone who wants me to create a deck as long as they can wait because I don't have internet everyday. Post your requests below. In your request, you can suggest cards you would like to add, Deck Name, Deck Limit, Favorite Cards, etc. --Michael lawrence dee (talk • contribs) 04:37, January 25, 2012 (UTC)

This really explains LIGHT and DARK combinations. I'm planning to add Chaos End Ruler -Ruler of the Beginning and the End- through printing and Nerf its effects. But I think it will look like stealing Kazuki's Copyright so I didn't continue.

Well, non-anime characters, I can still give decks from TF5. Some decks of tier 3 charcter are moved to different tier 5 characters. For example, in TF3, Akihiro Yamane's decks I think is giving control of monsters to his opponent, but in TF5, his deck is now owned by KENYoU and Akihiro Yamane's decks is now Venom/Worm. --Michael lawrence dee (talk • contribs) 00:58, April 10, 2012 (UTC)

Look, I know you deleted the game but I can,t find the decklists anywhere else, so could you please download the game again and find them?

Unfortunately...... My internet is very slow, I don't know if I can even ever download it. And this is the only website where I can find Decklists.

The translated lore via English Patch is incorrect. I do not know how to speak or read Japanese but I can confirm that the edit that I made is correct due to how Zushin worked in Tag Force 6. It's the effect and not exactly the lore that counts rights? That word "your" has a big difference in terms of gaming just so people won't get confused. I'm playing a Yu-Gi-Oh! Simulator which has Anime Cards as well so TF6 is not the only reason to edit it. Michael lawrence dee (talk • contribs) 06:42, August 26, 2014 (UTC)

I'm aware of the answer you gave me before. But why did you change the lores of the "Timelord" monsters to "Shuffle this face-up card into the Deck."? --UltimateKuriboh (talk • contribs) 03:24, November 24, 2014 (UTC)

Sorry, I'm still working on copying Tag Force Special Decks into wikia. And I'm not so sure about what to add to each of their pages other than the Decks. I never got to play Tag Force Special's Story Mode nor Free Duel yet. Michael lawrence dee (talk • contribs) 03:15, June 21, 2015 (UTC)

That's fine. Keep up editing what you wish to edit. If you want to what to add, just take a look at Kalin's page for now. That's about as complete as one is going to get (though obviously we'd want story elements from the other games added). For another example, take a look at some of the Duel Carnival articles like Reginald Kastle (World Duel Carnival). The important parts are the lead paragraph, the infobox and the templates at the bottom. But again, if you don't wish to do that, I'll get to them eventually. Thanks again. Cheesedude (talk • contribs) 04:25, June 21, 2015 (UTC)

I'd like to point out a character named Mysterious Barian (not sure of his real English Name). He's not in the list of Duelists but he has a Deck Recipe and is duelable. Please check the page since you guys know what todo. --Michael lawrence dee (talk • contribs) 13:54, June 27, 2015 (UTC)

Retrieved from "https://yugioh.fandom.com/wiki/User_talk:Michael_lawrence_dee?oldid=3123147"
*Disclosure: Some of the links above are affiliate links, meaning, at no additional cost to you, Fandom will earn a commission if you click through and make a purchase. Community content is available under CC-BY-SA unless otherwise noted.