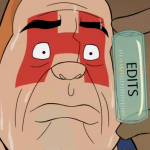 Nice job enduring "Fronky". I would never have lasted as long as you did in a chatroom with someone like that. Yugiohnerd22 (talk • contribs)

Please don't trying to shoving the -'s in that quotation, like other Admins already show you. It's just making it look senseless and ridiculousness! Just read this line and you will understand. --FredCat 01:22, April 4, 2012 (UTC)

Hey Malicious, thanks for the new images. Remember not to add in spaces or anything other than letters/numbers, though. --Golden Key (talk • contribs) 12:44, April 20, 2012 (UTC)

Yes, so that it is the same order as card images.
Also, is there a reason for using the translated names instead of the official names that every other TF image uses?
and Licensing; it should go in the summary before clicking "Upload file":

Something I have completely forgotten, there was a Category for Tag Force images that was made later on. I've added it to the box above, just copy it as usual.
I'll bot add it to the ones that are already uploaded. -Falzar FZ- (talk page|useful stuff) 02:12, April 22, 2012 (UTC)

can you add all of the red-eyes black dragon family and all of the black feather archtype tag force pics please ?

can u tell me how to make high quality yugioh artwork? I really want to make one but i don't know how...:((

Retrieved from "https://yugioh.fandom.com/wiki/User_talk:Malicious_Software?oldid=2975670"
*Disclosure: Some of the links above are affiliate links, meaning, at no additional cost to you, Fandom will earn a commission if you click through and make a purchase. Community content is available under CC-BY-SA unless otherwise noted.