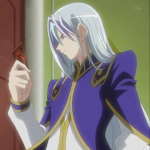 Hi and welcome to the Yu-Gi-Oh! wiki! Thank you for your edit to the Number C9: Chaos Dyson Sphere page.

Just go to the Quattro page, go up to the "Edit" button, click the drop-down arrow and click history. From there, compare your revision with the revision right before that. You will be able to see the differences you made in your edit. As such, you removed the note that was right next to "Number 15". What you need to do now is to add that line as a note to the highest point in the page. This would be "Number C15", the first instance where you use the "Nasch" note. --UltimateKuriboh (talk • contribs) 22:32, November 28, 2013 (UTC)

The relevant information for "Blast Sphere" can be found at Blast Sphere (DOR). When the Wiki rolls out the new design for card pages, there will be a link to that page on the "Blast Sphere" page. As such, I have undone your edit. --UltimateKuriboh (talk • contribs) 20:02, December 6, 2013 (UTC)

They aren't going to change themselves on those lists immediately. Editing the page that has the lists (without making any edits) might change them, but if it doesn't, you'll simply have to wait for the list to update themselves. --UltimateKuriboh (talk • contribs) 19:13, December 17, 2013 (UTC)

On the Yu-Gi-Oh! Staple Page, the reason I removed Vanity's Emptiness and Stardust Spark Dragon is because of 3 reasons: 1.) They are NOT in almost every deck like you claim 2.) They are already in the Semi-Staple page, and there's a reason for that. So why put in on the Staple page? 3.) Vanity's Emptiness limits Special Summons in general, and most decks in today's Meta rely on Special Summons, period. That's why you can't use this trap card in almost every deck. And Stardust Spark Dragon is only good for protecting specific things, not everything in general like the original Stardust Dragon (of course SSD can save 1 monster from battle, but how often do you really need that, especially in a Dragon Ruler deck?). NickTheForbiddenOne (talk • contribs) 15:51, December 25, 2013 (UTC)

Yes, it's perfectly allowed. Just go to your User Page (click on top-right corner of screen, where your username is), then move your mouse over the grey and white figure of a person next to your username, and click "Edit avatar". I'm going to delete the picture you uploaded, since if you want that as your avatar, you should be uploading it from your computer. --UltimateKuriboh (talk • contribs) 02:29, January 14, 2014 (UTC)

No, I'm pretty sure users can't create personal backgrounds for their User Pages. That being said, you may want to ask User:Cheesedude about the V thing. --UltimateKuriboh (talk • contribs) 02:42, January 14, 2014 (UTC)

Ok, I asked around a bit. It turns out is from the 5th opening theme, Dualism of Mirrors. Its easy to miss since the beginning of that arc had all three Tron brothers shaded out, so you'd have to look at one at a later episode in that arc. Cheesedude (talk • contribs) 03:08, January 14, 2014 (UTC)

I'm not sure where we would be able to use that image, truthfully. We prefer to put images around text they describe, which would exclude V's article, since the opening themes don't have much impact on his bio. You could perhaps put it somewhere on the Dualism of Mirrors page, I suppose. Cheesedude (talk • contribs) 03:17, January 14, 2014 (UTC)

You know, if you save the image and then convert to .png (and crop if necessary in Paint), you can upload it over the pre-existing image. Just click on the "Starship Spy Plane" image so you get to here: File:StarshipSpyPlane-LVAL-EN-C-1E.png. Then, go up to the "edit" button, click the drop-down arrow, and select the "replace" option. From there, you upload the image. Simple. --UltimateKuriboh (talk • contribs) 06:00, January 20, 2014 (UTC)

Amending the above, that text change is only confirmed for the OCG. The TCG will continue using the old text, until the TCG is confirmed to have an errata as well. --UltimateKuriboh (talk • contribs) 20:40, March 12, 2014 (UTC)

Retrieved from "https://yugioh.fandom.com/wiki/User_talk:DysonSlinky?oldid=2740917"
*Disclosure: Some of the links above are affiliate links, meaning, at no additional cost to you, Fandom will earn a commission if you click through and make a purchase. Community content is available under CC-BY-SA unless otherwise noted.