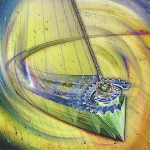 Hi. How do you write a Set Gallery for a Case Topper card?

Code of the Duelist: Giant Edition

There are previous sets of those, but they still use the old code, so I want to know if there is a way to write it down in the new format, because the card is SR, but also a Case Topper, so it has to have the KR-SR-UE-CT extension and show (CT) for rarity like the previous ones.

But that wouldn't display exactly as you'd wish and wouldn't be pretty. I shall update the gallery module to accommodate for this kind of galleries when I have more time.
And we should really think of a better way to handle those galleries. Becasita Pendulum (talk • contribs) 13:31, October 3, 2017 (UTC)

Could you please fix (or add) the Templates for the DP18 Images?

I am uploading the set now, and seems the Template is missing because all end up with red text in where they should display the links to the Set and print.

I just discovered Skulldeat, the Chained Dracoserpent. After taking a look at it, I'm a bit confused. It's a Link 4, which I don't mind. But it gains effects depending on how many monsters it was Link Summoned with. This is what's confusing me.

I thought that in order to Link Summon a monster, you needed the exact same number of monsters as its Link Rating(You can also use Link Monsters as multiple Link Materials equal to their Link Rating).

My question is if Link 4 monsters like Borreload Dragon, Firewall Dragon, and Skulldeat really can be Link Summoned with less than 4 monsters. If you can actually summon things like this with just a Gofu the Vague Shadow, then that's just absurd.Surfinbird42 (talk • contribs) 14:13, October 13, 2017 (UTC)

Hello there. Well, that's the way it is. I guess you replied to your own question. You can indeed use Link Monsters as "multiple" materials. But don't forget that in order to Summon that first Link Monster, you had to use multiple monsters for it. Becasita Pendulum (talk • contribs) 18:39, October 13, 2017 (UTC)

So the scenario I described CAN happen. Thanks. It can be hard to realize that there are differences between YGOPro and the real-life card game. And I will say that since Gofu IS a 1-card Firewall, Borreload, Decode Talker or whatever, I wouldn't be surprised if it got Limited in the TCG too.Surfinbird42 (talk • contribs) 02:06, October 14, 2017 (UTC)

They are subjects without any relationship, but they're causing a confusion in my head for a while and no one answered me.

First, i was wandering in some FMR when i found a monster lore that linked this list http://yugioh.wikia.com/wiki/Shell. Is there similar lists which explains the monsters from FMR that can be equipped with another equip spell cards?If not, cna i create one? And if yes, how can i do it? I searched and i didn't find anything. Now, about the Collected Power and Tailor of the Fickle Rulings Say for example, i have 1 "Destiny HERO - Plasma" and 1 "Relinquished" under my control and 1 of them is already equipped with a monster: can i use the Collected Power of Tailor of the Fickle to switch the monster being used as a Equip to the other monster? I know this is kinda noob from me to ask this, but the rulings won't explain this part of the rulings. --OnePiece (talk • contribs) 14:40, October 18, 2017 (UTC)

From Card Rulings:Collected Power#cite_note-OutofDate-1: "monsters treated as Equip Cards (except Union monsters equipped by their own effects) cannot have their equip target changed.". So no, you cannot.
As for the video game stuff, I'm not into it, so I can't give you an answer. I will point this to someone else. Becasita Pendulum (talk • contribs) 17:22, October 18, 2017 (UTC)

That was a major blunder on my part. I directed it to the wrong link.

Hi. It is not like that I ignored your demand before. I just do not know how to change the extension name from PNG to png. Since Windows always deems them to be the same extension, and every time I try to rename my images' extension to png, it does not allow me.--Luma.dash (talk • contribs) 17:39, October 19, 2017 (UTC)

Yeah, I know that it is not always ideal to write in the Visual Editor (since it sometimes gives a side-effect), although it has some advantages. But even then, I usually check up with the source-editor that is built in it in order to eliminate such effects.

But, do you guys enforce a rule that says you must not use this editor, or that you just advise against it? I just do not want to step onto the red line everytime.--Luma.dash (talk • contribs) 18:50, October 19, 2017 (UTC)

Or are you just incapable of apologizing because you think your paranoia over the Lancers is justified? --ArcVRains (talk • contribs) 21:24, November 8, 2017 (UTC)

It's not your opinions that I care about; it's with how you handled what happened on the Lancers page. After two edits, you threatened to block my account without even trying to ask me to stop, all because you were paranoid DragonEmperor and I were gonna start an edit war. Then you said it was a warning to anyone who would try to mess up the article, only to follow up with how you did it because you assumed I wouldn't have stopped if you had asked me to. That's what I want an apology for. It had been three weeks since I first joined the wiki by then and you barely even knew me, yet you assumed I would have just complained and kept going if you had tried asking me to stop. I would have stopped; heck, I was gonna stop if he had reverted my edit again and take it to the talk page.

I don't like leaving behind redirects when moving pages unless your changing from the Japanese name to the official English one.

Otherwise I would it potentially problematic when you've got multiple redirects going to the same page that isn't something like a character page for a series that has multiple characters that have too little info to justify having their own individual pages.

It might also be a good idea the to separate Traps and Spells from Monsters in the Anime Navbox like how the normal Navbox does as to not confuse people trying to see only the monsters of an archtype in the anime. Chimera-gui (talk • contribs) 03:03, November 8, 2017 (UTC)

Apologies for creating that page without adding new content to it. If I ever make another page for whatever reason, I will be sure to remember that. Thanks for the feedback and have a nice day. KyrusDarkblade244 (talk • contribs) 13:41, November 8, 2017 (UTC)

I've just got news of the impending Korean release for the EP17 by the end of this month; so I proceeded to add the basic info to the product page; everything fine.

But noticed the KR list was already created a month ago Set Card Lists:Extra Pack 2017 (OCG-KR) as a basic port of the JP one. So, not yet knowing if the KR version will be an exact mirror of the JP one (which I am sure it will not, because the juicy part of the EPs are the "exchange" cards from both OCG regions). What do you think it should be done? Should the list content be deleted? Or should it be left around and updated once the product is out? I think deletion is in order so to not cause false expectations or confusion. --Erdvilla (talk • contribs) 20:38, November 10, 2017 (UTC)

Hey there! What's up?
Ah, thanks for pointing this out! Yeah, no source given and it was a direct copy-paste from the Japanese one. I've now deleted the page, since it contained false info (should have been deleted immediately (shouldn't even have been created in the first place)).
Once you get the info, feel free to add it! Becasita Pendulum (talk • contribs) 20:42, November 10, 2017 (UTC)

Thanks for the heads up!

Why did you delete the Portuguese list of Legendary Collection Kaiba that I've made. If it's incomplete, you should delete the English list too. I make all my portuguese lists on the exactly same format that the English. I make all my edits thinking on the Brazilian and Portuguese community. Make sure when another cards be revealed and when collections be announced I'll add the names in Portuguese who are available and I will make lists for the benefit of the people who use the wiki and just speak Portuguese. Sorry for your page, i am on my cell phone, later I'll edit and organize. THANKS!!! --LuahNerd5 (talk • contribs) 07:22, December 2, 2017 (UTC)

There is no use in having two incomplete lists and update them simultaneously. The English one is there, because cards are revealed. And it's useful for people to check what will be in the set. As for the Portuguese list, sure, could serve the same purpose, but it's not very productive. Furthermore, the English cards are the ones revealed; not the Portuguese ones (at least as a general rule, but not always, I know). Becasita Pendulum (talk • contribs) 12:40, December 2, 2017 (UTC)

Hi! I just uploaded my cards from those sets; and the numbers haven't been updated (red numbers) and also the images get the red templates when opened; don't know if this is also linked to the red card numbers or it is a simple tweak somewhere so that they display the proper text of "This is from the Unlimited Print of..." etc.

Footnote: Also during this next week I plan on uploading my EP17-KR images, so if you could make those numbers blue and make sure the image templates are there while you fix these two it would be great so I won't bother you for that as well after I am done. --Erdvilla (talk • contribs) 23:47, December 8, 2017 (UTC)

Did the red numbers manually; only the images template is missing now. And the SPWA Number redirects (which I left on your designated "to do list").--Erdvilla (talk • contribs) 18:19, December 11, 2017 (UTC)

Retrieved from "https://yugioh.fandom.com/wiki/User_talk:Becasita?oldid=3906444"
Community content is available under CC-BY-SA unless otherwise noted.