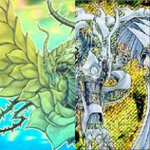 I carry a few decks, two made for tournaments, and 2 for casual play. My tournament decks are Starlight Rose Synchro and Crystal Abundance OTK. My Casual Decks are a Jumbled up Warrior Deck and a jumbled up Spellcaster Deck.--BassNettoHikari2 18:27, June 10, 2010 (UTC)

Thank you for the compliment, it is ironic that I use so many traps, with Jinzo in my deck, but I just find that traps are just awesome. They are all so good and they have useful effects. Although in Crystal City, I don't want many traps. They counter well. I just woudl rather have a lot of traps in there rather than a lot of spells

Thanks for your input about Masked Knight. Its kinda disappointing to think that ill never get to use him. I just like my LV cards alot and when it was show on the show I've been waiting for him to be released. I you here enything about it I'd greatly appreciate it if you let me know. my email is kylees@comcast.net. Also If there are eny other support cards for the LV's that you know of besides level modulation, graveyard in the fourth dimension, level down,or level up. Again thanks for your comment.ＬＶｕｓｅｒ

My e-mail is OmniDraconis@yahoo.com and that goes the same for yahoo. I think it woiuld be easier that way. I don't have my decks with me as I am at work, but the one I would need help with are my Darkwing deck, Lightsworn, Machina, Zombie, Gravekeeper's, XYZ twilight machine and my flamvell burn decks. I know I have a lot of decks but not a lot of strategy, I've never been good at it. Talk to ya later. OmniDraconis (talk • contribs) 20:59, November 19, 2010 (UTC)

Finished listing my decks they are on my talk page, again thanks for the help

Well, me and BF2 reopened the Weekly Deck Competition Forum.

This is our idea page, please add your ideas/what you would like to see. Forum:3rd Installment of WDC Ideas

This is our current contest. Forum:Deck Contest 18: Decks in the Sky, still time to join in on it.

Retrieved from "https://yugioh.fandom.com/wiki/User_talk:BassNettoHikari2?oldid=1576773"
Community content is available under CC-BY-SA unless otherwise noted.