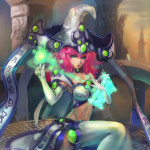 Hi. Gwenhwyfar isn't a "Noble Knight" (and no one is saying that she is), but it's a support for them AND based on a character of their legend. There's no list of cards and their origin in the "Noble Arms" page, so that's why she deserves to be there, so all the information of their origins are in the same place. --Missign0 (talk • contribs) 01:14, January 4, 2014 (UTC)

That is not the point of dispute. Gwenhwyfar does not belong to the Noble Knight archetype under the standards used by the Wikia, regardless to the fact that she is clearly meant to support them. Going by that standard, Gwen would have to be removed from the page. That said, I have been trying to think of a good way to bring up her addition to the Noble Arms archetype so that the information is presented properly and could use some aid in dealing with that. - Axel Shiokawa (talk • contribs) 01:20, January 4, 2014 (UTC)

But then, "Lady of the Lake" won't be in neither of those pages. I've added a note there cleary saying "female members/support" to let the Lady to be there. The page is being edited again with other people, I don't do edit wars, so you can handle this if you want. --Missign0 (talk • contribs) 01:30, January 4, 2014 (UTC)

Retrieved from "https://yugioh.fandom.com/wiki/User_talk:Axel_Shiokawa?oldid=2663419"
*Disclosure: Some of the links above are affiliate links, meaning, at no additional cost to you, Fandom will earn a commission if you click through and make a purchase. Community content is available under CC-BY-SA unless otherwise noted.