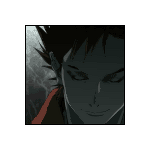 "Imagination is more important than knowledge. For while knowledge defines all we currently know and understand, imagination points to all we might yet discover and create."

Welcome ladies and gentlemen, for the show has begun. Now, let the curtains rise and fall!

The very imagination I posses extends farther than the ocean floor, for it is vast, deep, and unknown like myself. I am known as the Weaver of Dreams, a Dreamer, an idealist... A man of intelligence or a man of stupidity. A child, a father-figure, or a friend to others, to some an enemy or a stranger. However, at times I'm a man of action (Serious) or a man of words (Wisdom/Knowledge), for both are deadly tools in my possession.

I'm a man of standards, honor, and pride. I am reliable and trust-worthy, if I fail, I try my best to return the favor even if it costs me time or death. I'll take a bullet or hit for those I know without hesitation and if the person is injured or harmed, may God have mercy on the poor soul who dealt the injury, for I am not one to standby and let those I know be hurt in front of my eyes.

Realism defines who I am; however, others define realism as negativity. Nonetheless, it doesn't prevent me to be an idealist and give up on what I believe in or determined to accomplish, for I said before, "I am a man of action." I will not rest nor let the Sands of Time crumble 'til the the very accomplishments, goals, ambitions, and hopes become reality!

I've stumbled upon Yu-Gi-Oh! TCG during the time I entered 6th grade where cards such as Relinquished, Dark Magician, Shadow Ghoul, Wall Shadow, Blue Eyes White Dragon, and Red Eyes Black Dragon were cards often played in duels. At that time, I just collected the cards based on the artistic drawings that caught my fancy. Although, the cards I was fond the most were equip cards back in the day, which wasn't 'til the following year where players began constructing decks. I didn't know how the game was played, but I quietly watched the players duel and learned from there, then the following day I constructed my own deck with the collection of cards I acquired from school. Unfortunately, the cards I used were cards players weren't interested in, so I based what I scavanged and used it in duels. Honestly, I didn't know what I constructed at first since the deck was based around using Labyrinth Wall, Magical Labyrinth, and Wall Shadow; however, to my surprise I learned a few combos and won several matches due to Shield and Sword with Axe of Despair or Megamorph.

Anyway, over the years players were getting a bit more complicated due to the favoring of Archtypes and the usage of Teir 1 decks. It annoyed me dearly to face pre-constructed decks with a few additional cards they decided to add into the recipe for their own style of gameplay. Unfortunately, for most copycats, I ran a deck I've been working on during high school, which was the use of stall and burn method. However, three years went by and people continued using Teir 1 decks, so I continued twicking the Pyro deck in order to put the players in check. Sadly, Blackwings bested my Pyro deck due to swarm and field advantage. Nonetheless, the arrival of Volcanic increased the potential of the deck and with the release of Royal Firestorm Guards, the deck presented itself as a threat.

Now, it has been a total of eleven years that I ran the Volcanic Blaze and it haspotentially keps head-to-toe on Teir 1 decks or decks used in Tournaments. However, the deck itself has more loss than wins; nonetheless, with the recent addition of Pot of Duality, Genex Ally Birdman, Laval Magma Cannoneer, and Blaze Fenix, the Burning Bombardment Bird, the deck has been capable of ending Teir 1 decks in or near a tie. Thus, I am proudly happy to announce my pride and joy of my Volcanic Blaze and the skills of endless research in deck construction.

Retrieved from "https://yugioh.fandom.com/wiki/User:Xesna?oldid=1998642"
*Disclosure: Some of the links above are affiliate links, meaning, at no additional cost to you, Fandom will earn a commission if you click through and make a purchase. Community content is available under CC-BY-SA unless otherwise noted.