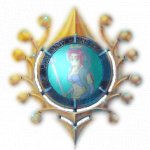 Hey there! Welcome to Wilren's little blurb on the Wiki.

Well, obviously I like the Yu-Gi-Oh! TCG (why else would I be here, right?)..umm, what else what else...not really a whole lot to say, really. I joined up because I liked to add some useful tidbits to various entries from time to time and thought it'd be interesting.

Ever since I first got into this game, my favorite kind of deck to run has been a Ritual deck. This became even more the case when the Djinns of Rituals came out; while I've never been able to keep pace with the meta's rampant Special Summoning, "Djinn Releaser of Rituals" gave me an answer to that. Whether I'm running a build focused on "Relinquished," "Divine Grace - Northwemko," or what have you, the goal has become the same: lock out my opponent's Special Summons. No matter what form it takes, this particular set up has always gone by one name:

The name both codifies its Ritual basis, and sends a message of impending doom to my opponent; functionality and psychological warfare make such a nice combination.

The majority of the monster lineup is centered around either bringing out Northwemko, or searching out Releaser. Tour Guide can search Releaser out directly, Armageddon Knight can mill it (setting up the Tributes for a Ritual Summon perfectly), and Summoner Monk can pull out Armageddon Knight to do his job(especially dirty if I use Ritual of Grace to fuel his effect and have Preparation of Rites in hand). The lone copy of Presider allows for a hand-and-field-free Ritual Summon, and Grand Mole allows me to take advantage of an opponent reduced to Normal Summons by removing whatever they're able to summon.

The Extra Deck is primarily designed for defense in case I get into a tight spot. Maestroke and Zenmaines are the big players there, giving Northwemko a solid pair of anchors to secure herself to for her protection effect, and Leviair can recover banished Djinns to use again and again.

My favorite one of all time? Easy. XYZ-Dragon Cannon. Super Robot anime have always been a favorite of mine, especially when they involved beastmecha or gestalts (multiple mecha combining into one a la Voltron), so when XYZ hit the stage, I was quite pleased.

Oddly enough though, I don't care much for VWXYZ-Dragon Catapult Cannon...mostly because it just looks stupid. I think it's the arms, really. It looks less like it's got a giant pair of claw arms and more like it's got a pair of dinky little hands holding a pair of giant spoons. Sheesh, what a waste...

...Seriously, I can't think of anything else to put here. Shoo, shoo!

Retrieved from "https://yugioh.fandom.com/wiki/User:Wilren?oldid=2387842"
*Disclosure: Some of the links above are affiliate links, meaning, at no additional cost to you, Fandom will earn a commission if you click through and make a purchase. Community content is available under CC-BY-SA unless otherwise noted.