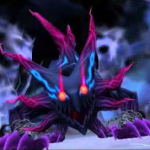 You have activated my trap card, but I still take the damage.

Realized "World Legacy's Memory" is of the distant past and that the blue haired girl is "Lee", note the headgear on "Lee the World Chalice Fairy" and "Knightmare Corruptor Iblee".

Greatest of All Time

Heads I Win
Normal Trap
During your opponent's End Phase: If you control no cards, you can activate this card from your hand. You win the Duel. Neither player can activate cards or effects in response to this card's activation.

Tails You Lose
Continuous Trap
Unaffected by card effects. At the start of your opponent's Main Phase 1: Place this card (from your hand) on your opponent's side of the field face-up. When you activate a card or effect: Your opponent wins the Duel. You cannot win the Duel.

The Duel
Quick-Play Spell
If a card or effect is activated that has "the Duel" in its text, even if cards cannot be activated in response: Reveal this card; both player's LP become 0, also negate the effects of your opponent's Spell/Trap and monster effects in this Chain. This effect cannot be prevented.

Dropkick on my Duel

Jashin
Level 4 DARK
Fiend/Effect
Once per turn: You can target 1 monster on the field; destroy that target, then place 1 Dropkick Counter on this card. When this card is destroyed and sent to the GY: You can add 1 "Devil Super Glue" from your Deck or GY to your hand. You can only use this effect of "Jashin" once per turn. If an "Apocrypha" targets this card: Destroy a number of monsters on the field up to the number of Dropkick Counters on this card.
2000/500

Yurine
Level 4 DARK
Spellcaster/Effect
When this card is Summoned: You can add 1 "Grimoire Vol 1" from your Deck to your hand. If a "Jashin" you control activates an effect that targets this card: You can negate the activation, and if you do, either destroy it or add 1 "Vlad the Impaler's Spears" from your Deck to your hand. This card is unaffected by “Death NOT".
500/2000

Grimoire Vol 1
Normal Spell
Special Summon 1 "Jashin" from your hand or Deck. You can only activate 1 "Grimoire Vol 1" once per turn.

Grimoire Vol 2
Continuous Spell
When this card is activated: Target 1 "Jashin" monster you control; its effects are negated until the End Phase. You can only control 1 "Grimoire Vol 2".

Apocrypha
Normal Spell
Send 1 "Grimoire Vol 2" you control to the GY and target 1 Fiend monster on the field; return that target to the Deck. You cannot activate "Grimoire Vol 2" during the turn you activate this card.

Death NOT
Equip Spell
The equipped monster cannot activate effects in response to the activation of a "Jashin" that targets it with an effect.

Vlad the Impaler's Spears
Normal Trap
Target 1 monster on the field; equip this card to that target. It cannot declare an attack. If this card would be sent to the GY while you control a "Yurine", Set it instead.

Devil Super Glue
Equip Spell
Target 1 Fiend monster in your GY; Special Summon that target in Attack Position and equip it with this card. When this card leaves the field, except by its own effect, destroy the equipped monster. Send this card to the GY during your 2nd Standby Phase after activation.

Kazuma, the Adventurer of Pantsu
Level 4 DARK
Warrior/Effect
You can roll a six-sided die, then target cards in your opponent's Spell & Trap Zones, GY, and/or banished equal to the number rolled; your opponent chooses 1 for you to Set on your side of the field, also it can be activated this turn, but it is sent to the GY during the End Phase. You can only use this effect of "Kazuma, the Adventurer of Pantsu" once per turn.
1800/1200

Darkness, the Crusader of Masochism
Level 8 EARTH
Rock/Effect
(This card's name is always treated as "Lalatina Ford Dustiness".)
When this card declares an attack: Toss a coin and if the result is tails, negate the attack. You can only use each of the following effects of "Darkness, the Crusader of Masochism" once per turn.
● (Quick Effect): You can change this card's battle position.
● When an opponent's monster declares an attack: You can change the attack target to this card and perform damage calculation.
2500/3000

Megumin, the Arch-Wizard of Chuunibyou
Level 6 FIRE
Spellcaster/Effect
You can roll a six-sided die; this card's battle position cannot be changed until the end of your next turn, also change this card you control from face-up Attack Position to face-up Defense Position, and if you do, destroy cards on the field up to the number rolled, then take damage equal to the number rolled x 500. You can only use this effect of "Megumin, the Arch-Wizard of Chuunibyou" once per turn.
2000/200

Retrieved from "https://yugioh.fandom.com/wiki/User:Pitifulheartles?oldid=4343013"
*Disclosure: Some of the links above are affiliate links, meaning, at no additional cost to you, Fandom will earn a commission if you click through and make a purchase. Community content is available under CC-BY-SA unless otherwise noted.