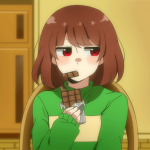 I particularly hate when people "Over-use" Destruction Cards(Effects that destroy Monsters, Spells and Traps with one effect). so almost each Deck I make never exceeds 2 or more destruction cards unless the Theme of the Deck I use calls for more. Ironically I like cards with Immunities from destruction and use them whenever possible, for example cards like Vennominaga the Deity of Poisonous Snakes. Even more Ironically I like to use cards that prevent the opponent from using certain effects without actually destroying them such as Jinzo and sometimes Horus the Black Flame Dragon LV8 even though his effect destroys them afterward.

My favorite monsters now are "Psychic-Types". They have been my favorite since they came out and will continue to be my favorite. I just hope Psychic monsters become popular enough to get more support in the near-future.

My first yugioh cards I ever obtained was a Promo of "The Winged Dragon of Ra", then I got Sasuke Samurai 2, Sasuke Samurai 3, and Sasuke Samurai 4 from my friends cousin. I've been interested and addicted to the game ever since.

Retrieved from "https://yugioh.fandom.com/wiki/User:Lyani?oldid=2502184"
*Disclosure: Some of the links above are affiliate links, meaning, at no additional cost to you, Fandom will earn a commission if you click through and make a purchase. Community content is available under CC-BY-SA unless otherwise noted.