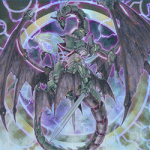 Your standard Yu-Gi-Oh player. However, it's kinda boring when you can't find any challenging new opponents...

I live somewhere in Singapore, and hence play using English, Japanese, and Asian-English cards. A fair amount are Japanese due to the fact that their boosters are loads cheaper, and are also available earlier. Heh.

I have a little hobby of designing Decks for relatively interesting Deck Types, as my relative lack of capital restricts my deck designing to just the drawing boards. Some decks I have thought of involve Reverse Burn, Venom and Junk Warrior decks. And yes, I do take the trouble to thinking of names for them. If you find someone on YGOpro going by the name of Gadjiltron, it's probably me.

Decks in the drawing board

These are all the Decks I have planned out, but don't have the money to construct fully. You are free to use these decklists in constructing and testing certain ideas. Bear in mind that some are outdated due to the changing banlists.

I swear, I'm the only one who ever bothers with these now.

Know that none of these listings follow a particular order.

Retrieved from "https://yugioh.fandom.com/wiki/User:Gadjiltron?oldid=3013902"
*Disclosure: Some of the links above are affiliate links, meaning, at no additional cost to you, Fandom will earn a commission if you click through and make a purchase. Community content is available under CC-BY-SA unless otherwise noted.