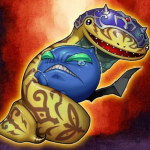 In this video, I'm discussing the new card "Metaphization", released in Japan in The Duelist Advent on the 19th April 2014, and how it could have an interesting effect on the game over the subsequent formats. From the Blue-Eyes engine to the revenge of the Dragon Rulers, could Metaphization become a game-changing power play for underrepresented decks of the Yu-Gi-Oh! communtiy? Or could it be the new dawn for one of the game's most feared strategies ...?

In the second episode of my YouTube series, join me as I discuss Pendulum Monsters, effects and summons, and how I think they'll impact on the game! Like Metaphization, could they take some of the most underrated decks in Yu-Gi-Oh! history, and make them playable? Or could they be single-handedly responsible for the complete resurrection of the Dragon Rulers, Scraps and other themes that, in their day, had the monopoly on the metagame?! And let's not forget "Odd-Eyes Pendulum Dragon", the ultimate Pendulum card that searches, then revives itself from the extra deck!

Retrieved from "https://yugioh.fandom.com/wiki/User:GGNoRe?oldid=2753300"
*Disclosure: Some of the links above are affiliate links, meaning, at no additional cost to you, Fandom will earn a commission if you click through and make a purchase. Community content is available under CC-BY-SA unless otherwise noted.