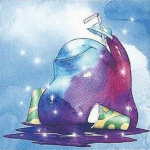 I started playing Yugioh during Prime Ruler format. I used to collect the cards when I was little, but most of those were lost/ruined, and I got out of it. I love this game and plan to follow it to the very end, so when the anime/manga/video games/card game stops, I'll stop too...though due to Yugioh 6 coming out this year...this may take longer than I thought. On YouTube, I used to be known as one of the many Yuya Sakaki channels, but it had to be deleted for security reasons.

The job I want to have in the near future is video editing/movie making. When I was little (Age 7 to 12), I used to make movies using toy soldiers, which is what I collected before Yugioh cards. My favorite type of movie is Found Footage Horror, favorites being: June 9, Blair Witch Project, Blair Witch, Eyes in the Dark, Evidence, Evil Things, and Nightlight. I've attempted writing a few scripts for my own found footage short film, but not much really happened with them. One of my goals for this year is to make one, but I'm facing several problems, such as time, resources, crew, and a couple minor medical problems.

What I Do Here and My Goals

I add recommended card sections to archetypes/series that can use them, do a bit of clean up if I come across any errors while traveling through the site, and update the bios for the ARC-V Manga characters (I need to do more that aren't Yuya and Reiji, lol).

My main goal on this site is to learn how it works and eventually become an admin once I've learned enough.

These are some of the decks I have IRL. I'm sorta a budget player, so my card choices may seem odd to more competitive players.

This deck is an interesting mishmash sorta combo deck I've been working on, and it reminds me of Thunder Dragons, as its a offensive/defensive combo deck focused on making large Fusion Monsters and using stun cards. Ultra Polymerization is essentially the deck's ace card. The Extra Deck makes me wish we could play 20 card Extra Decks, because the space is so tight..

Update 10/20/18: The deck performed incredibly well in its first run at locals. 8 out of 10 duels in 4 matches, I opened the main combo pieces due to the amount of different various pieces I can use for it, and 6 out of those 8 resulted in me also summoning Cyberse Clock Dragon. Every opponent complimented the deck, and my friend who I went up against said “keep working on that deck, dude. That has so much potential if you keep trying new things with it”.

This deck is another fun IRL one. Ghostrick isn't f***ed over by MR4 like most people think. The main deck is a little bloated, but it still works.

Retrieved from "https://yugioh.fandom.com/wiki/User:Fusion_Perfection?oldid=4006794"
Community content is available under CC-BY-SA unless otherwise noted.