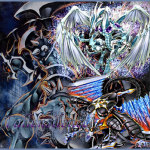 Welcome to my account and it's boring so yeah. Please don't sabotage it or I will kick you. In the knee. Before the arrow gets there.

Well, I have to now keep it confidential. I'm making decks like crazy thanks to dueling network which by the way, if anyone want to duel me, my username is my wikia username.

So I was thinking of dream cards and why not just re-edit some of Yugi's cards? All the monsters listed has the same attack, defense and attributes as the original cards.

Beaver Knight - Original Beaver Warrior - When this card is destroyed, target one monster your opponent controls. It cannot attack.

Radiant Guardian = Mystical Elf - During each of your main phase, all monsters you control gains 500 attack and defense.

Mammoth Decay = Mammoth Graveyard - When this card attacks or is attacked by a monster that has higher attack points, your opponent's monster attack points becomes the same as this card during the damage step only.

Widespread Motion Movement - Original Diffusion Wave-Motion - Remove from play one monster and target one monster on the field with the same attribute and type. That monster can attack all monsters your opponent controls one each, but your opponent takes no battle damage this turn.

Card of Sanity - Original Card of Sanctity - Draw the same number of cards as your opponent and remove from play the same amount of monsters you drew from the graveyard. You cannot activate or set any cards this turn.

Trick Barter - Original Exchange - Both players look at all set cards on the field and chooses one card from the other player's field. Add the card you chose to your hand and your opponent adds the card they chose to their hand.

Suffering Atmosphere - Burning Land - All face-up cards your opponent controls have becomes 0 when this card is activated and all monsters you control can inflict Piercing Damage while this card is face up on the field.

Falling Comet - Full Moon - All monsters you control gains 300 attack for each monster with the same attribute on the field. When this card is destroyed, all monsters on your opponent side of the field loses all of their attack points.

Monster Re-Destination - Monster Recovery - Return all monsters you control to your deck and shuffle. Then draw equal to the amount of monsters returned by this effect.

Malicious Transfer Spear - Living Arrow - Target one face-up Spell or Trap card you control. This card's effect becomes that card and last until the end phase.

Spellbinding Star - Spellbinding Circle - Target one monster your opponent controls. It loses 500 attack for each monster on the field and cannot attack.

Trigger Force - Mirror Force - When a monster's position is changed, destroy all monsters on your opponent's side on the field with the same position.

It's a new type of summon that I have thought of myself. You use a specific spell card to special summon the monster but from the MAIN DECK. Then the monsters used for that summon are banished and return to the graveyard when used by those monster's effect.

Unlock the Gates! -Spell card: When this card is activated, target two monsters you control; banish them. Then special summon one level 7 to 8 normal monster from your deck. Then tribute that monster and special summon a Colorless monster that is appropriate for the Color monster's requirement.

Awaken the Sleeping Deities - Spell card: Tribute one warrior type monster and another monster and banish them; special summon Black Shining Soldier from your deck or hand.

Gaia the Charging Knight = Gaia The Fierce Knight Color Monster - When this card is Color summoned, it gains this effect:This card can inflict piercing damage when attacking an opponent's defense position monster. Once per turn, target one dragon-type monster you control: this card gains attack equal to that monster's attack until the End Phase.

Plague of Dragons = Curse of Dragon Color Monster - When this card is targeted by a card effect, all monsters your opponent controls loses all of it's attack and defense points until End Phase.

Summoned Dreadscythe = Summoned Skull Color Monster - When this card is Color Summoned, target one monster your opponent controls; switch it's position and this card gains attack equal to half the attack points until End Phase.

Black Shining Soldier = Black Luster Soldier Color Monster - Once per turn, return one banished monster you control to the graveyard; special summon one dragon type monster from either player's graveyard in defense mode.

Yep I'm on the wikia chat most of the time now so feel free to stop by. Maybe.

I'm famous for being seen a lot on the General Discussion and will be at almost every post. Now I have moved on to the wikia chat. That's pretty much it. Oh and people call me Regret on the wikia chat (Zenonia reference) but feel free to call me that.

Alright I got one down! Time to find more! And with your help, I'll find the rest of the 4!

I have none except for Vavv Masumoto in this wikia. Sure he quit Yugioh but I liked to fight his Chaos Heroes some day.

Things I Do For Fun

I'm looking for some awesome dragon pictures right now that aren't yugiohish so I can upload here so please also give me some recommendations about it.

Retrieved from "https://yugioh.fandom.com/wiki/User:Fallensilence?oldid=2733357"
*Disclosure: Some of the links above are affiliate links, meaning, at no additional cost to you, Fandom will earn a commission if you click through and make a purchase. Community content is available under CC-BY-SA unless otherwise noted.