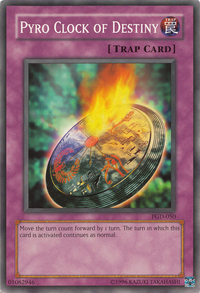 The turn count (ターンカウント Tānkaunto) is the number of turns in total that have been played in a Duel. Certain cards depend on this for effects to resolve during later turns after the card was initially activated. Several examples of such cards include "Final Countdown", "Lightforce Sword", and "Swords of Revealing Light".

Retrieved from "https://yugioh.fandom.com/wiki/Turn_count?oldid=3514613"
*Disclosure: Some of the links above are affiliate links, meaning, at no additional cost to you, Fandom will earn a commission if you click through and make a purchase. Community content is available under CC-BY-SA unless otherwise noted.