Trigger Effects are Spell Speed 1 effects. In general, Trigger Effects can be activated during any phase, although many individual Trigger Effects have restrictions on the phases in which they can be activated as part of their activation timing. Trigger Effects can be mandatory or optional. Here is an example. If you control "Starving Venom Fusion Dragon", its effect states: "If this card is Fusion Summoned, you can make this card gain ATK equal to 1 opponent's Special Summoned Monster." If this card IS successfully Fusion Summoned, then its controller can choose when to activate the effect. This is because "IF" effects cannot miss the timing. However, this effect only lasts until the end of the current turn.

Trigger Effects activate only once each time their condition is met. For example, if you control "Solemn Wishes" and draw 2 cards at once, you will only gain 500 LP (not 1000) because you performed only one act of drawing cards; and if you control "Aromage Jasmine" and gain 1000 LP, you will draw 1 card.

For cards with Problem-Solving Card Text, Trigger Effects can be identified by looking for a timing or event-related condition, followed by a colon. For example, the text "During the Standby Phase: You can..." or "If this card is destroyed by battle: You can..." indicates that the effect is a Trigger Effect, as they identify a specific phase or event during which the effect activates.

Effects with the phrase "during either player's turn" in their activation timing are Quick Effects rather than Trigger Effects.

If an optional Trigger Effect that does not miss the timing or a mandatory Trigger Effect meets its activation timing at an instant that Spell Speed 1 effects cannot be activated, such as when a Chain already exists, then it will start a Chain at the next possible opportunity. "If" and "during" are commonly used in place of "when" for effects that cannot miss the timing.

If multiple Trigger or Trigger-like Effects would activate at the same time, they are all be placed on the same Chain without any of them missing the timing.

The order these effects are added to the Chain depends on whether the effect is mandatory or optional, whether it is activated by the turn player or non-turn player.

The effect of "Zaborg the Thunder Monarch" is a mandatory Trigger Effect that activates when it is Tribute Summoned. This effect targets 1 monster on the field, then destroys that target when it resolves. 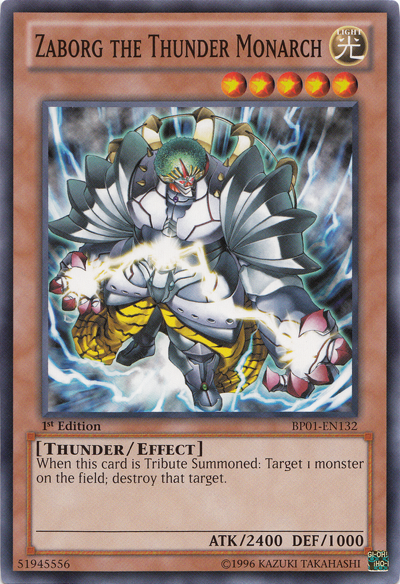 List of TCG and OCG Monsters with Trigger Effects