For cards with Problem-Solving Card Text, Trigger-like Effects can be identified by looking for a timing or event-related condition, followed by a colon.

Effects with the phrase "during either player's turn" in their activation timing are Quick-like Effects rather than Trigger-like Effects.

Effects with the activation timing "When this card resolves:" or "When this card is activated:" are card effects that apply during the resolution of the Spell/Trap Card itself, rather than Trigger-like Effects.

If an optional Trigger-like Effect that does not miss the timing or a mandatory Trigger-like Effect meets its activation timing at an instant that Spell Speed 1 effects cannot be activated, such as when a Chain already exists, then it will start a Chain at the next possible opportunity. "If" and "during" are commonly used in place of "when" for effects that cannot miss the timing.

If multiple Trigger or Trigger-like Effects would activate at the same time, they are all be placed on the same Chain without any of them missing the timing.

The order these effects are added to the Chain depends on whether the effect is mandatory or optional, whether it is activated by the turn player or non-turn player, and (in the TCG only) the order in which they met their activation timing.

Activating the card and effect in the same Chain Link

This only applies for Continuous Trap Cards, and does not apply for any other type of Spell/Trap Card.

The effect of "Eisbahn" is a mandatory Trigger-like Effect. 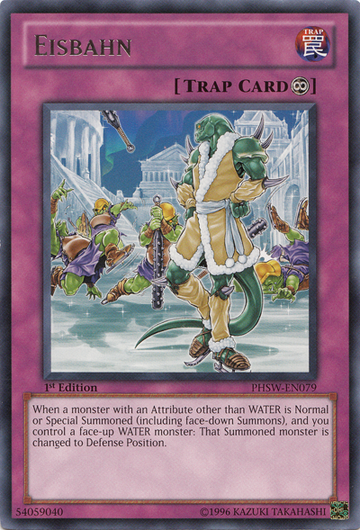