Trap Monsters are a type of Continuous Trap Card that is Special Summoned as a Monster Card after activation, being treated as both a monster and a Trap Card simultaneously. In the manga, they are a separate type of Trap Card.

If they are negated with "Jinzo" or "Royal Decree", they will return to the Spell & Trap Zone as Continuous Trap Cards with no effect, and will remain there even after "Jinzo" or "Royal Decree" are removed. If "Book of Moon" is used against an already active Trap Monster, the Trap Monster is set as a Trap Card again and can be activated and Special Summoned the next turn. If they would be destroyed by spell cards, cards like Judgment of Anubis can still be used to protect them.

If a Trap Monster is treated as an Equip Card from the Monster Zone, such as due to the effect of "Relinquished", it is treated only as an Equip Spell Card, not a Trap Card or Monster Card.

Trap Monsters are typically used as an emergency defense to stonewall an opponent ("Metal Reflect Slime" is particularly useful in this regard). They can also used to provide quick Tribute Fodder ("Metal Reflect Slime" is great when combined with "Level Eater"), such as the Monarchs, and can in some cases be used offensively as well. Also, because they don't count as monsters while in a player's Deck or Graveyard, some effects might work on them as a Trap Card, while others (like the effect of "Morphing Jar #2") don't see them as a monster. This can be helpful in some cases (see All-Out Attacks OTK).

Trap Monsters are also useful in a Uria Deck, as they provide the Deck with monsters that can also be used as a Tributes to Summon "Uria, Lord of Searing Flames" as well as give him extra ATK points.

It is usually a good idea to have "Trap Eater" and "Double Snare" and "Splendid Venus" in the Side Deck of a Deck using high concentrations of these cards, so that you can remove cards such as "Royal Decree" and "Jinzo" which obstruct the use of Trap Monsters. "Magic Planter" is also useful, allowing the player to send Trap Monsters to the Graveyard to draw cards; this is particularly useful if the Trap Monsters have their effects negated, which causes them to remain on the field as Continuous Trap Cards only.

"Judgment of Anubis" is useful to protect Trap Monsters from "Mystical Space Typhoon". 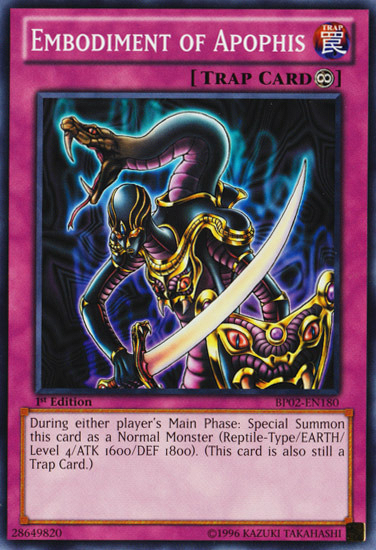 *Disclosure: Some of the links above are affiliate links, meaning, at no additional cost to you, Fandom will earn a commission if you click through and make a purchase. Community content is available under CC-BY-SA unless otherwise noted.
... more about "Trap Monster"
RDF feed
Japanese name
モンスター +
Page name
Trap Monster +
Page type
Archseries page +
Romaji name
Torappu Monsutā +
Advertisement