Start a Wiki
This article is about the character. For the cards, see "The Eye of Timaeus", "Legendary Knight Timaeus" and "Timaeus the Knight of Destiny".

Timaeus (pronounced "tim-EYE-us" in the English-dubbed anime) was a legendary knight from Atlantis, who aided Ironheart in the Battle of Atlantis.

Timaeus, like the other Legendary Knights, is named after one of Plato's dialogues, which are the source of many of the rumors pertaining to Atlantis.

In his human form, Timaeus dons teal/green armor, and his distinguishing feature is a scar over his right eye having lost it in an encounter with Dartz. Like the other knights, he bears a similar facial expression to his chosen Duelist, Yami Yugi. Timaeus's humanoid color scheme continues into his dragon form, where he is also mostly teal.

Timaeus has a Duel Monsters card form. The card, "The Eye of Timaeus", along with its counterparts "Fang of Critias" and "Claw of Hermos" are unlike other cards. They have their own set of rules and are color coded blue. The Dragons were placed in the Monster Card Zone, but played similar to if they were Spell Cards and could combine with other cards. Timaeus can combine with monsters to form new monsters. It has been shown to combine with two such monsters, "Dark Magician Girl" and "Dark Magician", forming "Dark Magician Girl the Dragon Knight" and "Amulet Dragon" respectively (Yami attempted to combine Timaeus with "Poison Butterfly", but it didn't work as Yami had lost Timaeus' trust at this point).

Timeaus and the other legendary knights, Critias and Hermos resided in the Spirit World, until Atlantis is corrupted by the Orichalcos. Ironheart Summoned them to the human world to help him thwart Dartz's efforts to wipe out the population of Atlantis in the misled hopes of starting the kingdom anew. However Dartz was able to weaken the knights by trapping them in the forms of dragons.

The Legendary Dragons, fought alongside rebels from Atlantis and other Duel Spirits against Dartz, Orichalcos Soldiers and The Great Leviathan. Timaeus successfully defeated a number of Orichalcos Soldiers. Dartz however teased his power, striking him with lightning and taking out his eye by means of the Sword of Kings.

The battle concluded with neither side victorious, and Atlantis sinking to the bottom of the sea. The Dragons were sealed in crystal prisons, to be freed if need should ever arise.

Yugi Muto and his other-self Yami Yugi were chosen as a Legendary Duelist to wield Timaeus. In a dream, the Yugis are taken to the Duel Monsters Spirit World, where they are taken to Timaeus, trapped in his prison. By removing a sword they set Timaeus free and get the card "The Eye of Timaeus", so that they may Summon "Timaeus" while playing Duel Monsters.

As a card, Timaeus had the ability to combine itself with Yugi's other monsters. He aided Yugi in his Duel against Rafael, but it was worried abandoned after Yami Yugi played "The Seal of Orichalcos". After Yugi lost his soul, Yami Yugi tried to summon "Timaeus" against Weevil Underwood, but Yami was deemed unworthy after his transgressions in his previous Duel. Yami Yugi came into contact with the spirits of Ironheart and Chris. They helped Yami recover his self-esteem and ultimately allowed him to summon Timaeus again. Yami did such as he battled Dartz's minions.

When Yugi faced Dartz, he used "Legend of Heart" to change the dragons back to their true forms. Together with Critias and Hermos, Yugi was able to defeat Dartz's "Divine Serpent Geh" and win the Duel.

However, The Great Leviathan, was Summoned again. Timeaus took part in the battle against it, this time his side emerged victorious. He, Critias, Hermos, and Dark Magician Girl appeared on the beach to thank Yugi before returning to the spirit world. 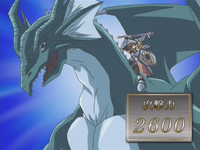 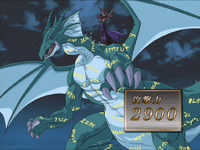 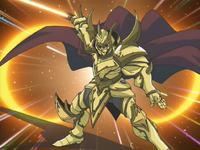