The Vagabond is a Duelist, steeped in legend and shrouded in mystery, who makes rare appearances in the game.

He will challenge you to Duels with special conditions, but depending on how the Duel plays out, you can obtain more character experience points than normal.

If you have the opportunity, be sure to challenge the Vagabond to a Duel!

The Vagabond will occasionally show up in Duel World. If approached, he will remain mute, but will offer to Duel the player with a pre-determined "challenge" imposed on that player. These opportunities are beneficial for the player, as they will receive more character experience points than normal from Dueling The Vagabond, with the amount being dependent on the type of challenge they endured and whether they won or lost. These possible challenges are as follows:

Occasionally after a Duel with The Vagabond (regardless of victory or defeat), The Vagabond will remark, "That was an interesting Duel. Are your friends as skilled as you? If they are, I would like you to introduce me to one of your friends," whereupon the player is subsequently prompted to pick one of their friends and assign one of the above challenges. 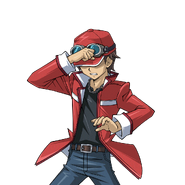 The Vagabond can use any Deck used by any other player of Duel Links, and picks a random Deck to use among them when spawning.

From v2.5.0 onwards, when challenging the Vagabond, the player is told what Deck he is using and who was the player who built it, and is allowed to look at said Deck after the duel.

Retrieved from "https://yugioh.fandom.com/wiki/The_Vagabond?oldid=4301497"
*Disclosure: Some of the links above are affiliate links, meaning, at no additional cost to you, Fandom will earn a commission if you click through and make a purchase. Community content is available under CC-BY-SA unless otherwise noted.
... more about "The Vagabond"
RDF feed
DULI Deck
Challenge Deck +
Gender
Male +
Japanese translated name
Nameless Duelist +
Video game appearances
Yu-Gi-Oh! Duel Links +