The Black Magician of the Forest (森の黒魔法使い Mori no Kuro Mahōtsukai) is a fairy tale book owned by Luna in the Yu-Gi-Oh! 5D's manga. Leo bought it in the past using the money they earned with Turbo Duels, to give it to Luna as a present. When the miasma of the Duel Dragon takes over Luna, she "enters" in the world of this fairy tale, having the illusion of the characters and story being real.

Once upon a time, there was a dark wizard in a country, as well as the cleverest old lady in the country.

The bad dark wizard transformed into a wicked dragon, harming the villagers, casting curses on whoever he saw, doing nothing but evil deeds.

The enraged king ordered the old lady to punish the dark wizard.

"I understand. But, I have a wish.", said the old lady. That wish is to go with a broken scarecrow.

"I will punish the dark wizard. I will bare his curse", the broken scarecrow sweared to the morning sun. So, the two of them went to the forest, where the dark wizard resided. 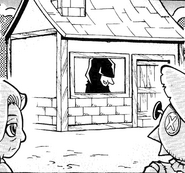 When the sunset painted the sky red, they arrived at the dark wizard's house.

The broken scarecrow asked, "The dark wizard can transform into a wicked dragon. How are we supposed to punish him?" The old lady said, "We can defeat him as long as we work together!".

The old lady shouted, "Dark wizard, if you continue to do bad things, I am going to eat you!". 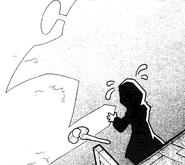 The dark wizard was scared and ran outside, horrified at seeing a giant shadow of a monster.

"Ah...", the trembling dark wizard got tied up by the old lady.

The true face of the monster's shadow was the broken scarecrow standing on the roof.

The dark wizard pleaded as he was crying, "I won't do bad things anymore. If you want to unlift the curse, reverting back to who you were, just have a shower of the sunrise's sunlight, and the curse will be removed."

Under the morning sun, the broken scarecrow prayed to the sun. 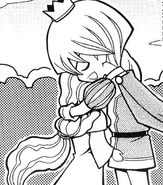 The prince thanked the old lady as he embraced her.

The old lady in the arms of the prince became a young maiden. "I was cursed to become an old lady. To unlift the curse, I must hug with a prince". 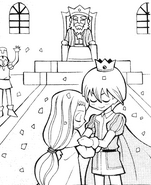 Then, the prince and the maiden rescued by the prince lived happily ever after upon the wish of the king.
Add an image to this gallery

When Luna is taken over by the Duel Dragon's miasma, she starts to believe that she is the old lady of the story, her brother Leo the broken scarecrow, Yusei the black magician (and "Stardust Spark Dragon" to be the dragon the magician becomes), and Goodwin the king.

Retrieved from "https://yugioh.fandom.com/wiki/The_Black_Magician_of_the_Forest?oldid=3915906"
Community content is available under CC-BY-SA unless otherwise noted.