Team ZEXAL is a Dueling Team inYu-Gi-Oh! D Team ZEXAL. It was formed by Yuma Tsukumo and his friends. Although Astral isn't an official member, he always helps Yuma in his Duels.

They formed this team in order to learn more about Dueling and get stronger together. They later take part in the Team Duel Tournament.

After that, Kaito Tenjo invites Yuma and Shark to join forces for the Duel Team Carnival. With the agreement of Team ZEXAL and Team Shark, Yuma, Shark and Kaito form a new Team ZEXAL.[1]

After forming the team, the members make a reunion, to which Yuma arrives late. The members were worried about Yuma being the leader, since he didn't seem much appropriate. Tetsuo then challenges him to a Duel - if Tetsuo won, he would be the leader instead. Yuma accepts the challenge, and wins, so the others accept him as the leader.[2]

The team later enters the Team Duel Tournament. Yuma Dueled Gauche in order for his team to participate, and won.[3] In the first round, Team ZEXAL faces Team Fire Stars.[4] The first Duel is Yuma Tsukumo vs. Shota Geki, which ends with Yuma's win. Tetsuo grants a second win for Team ZEXAL, while Takashi loses his match. With two wins, Team ZEXAL is the winner, and obtains their first Digital Stone.[5]

Their second match is against Team lswarm, which takes place in the Heartland Theme Park Horror Tower.[6]

Later, Team ZEXAL is shown to have earned 7 Digital Stones, with only 1 missing so that they can advance in the tournament. Then, their match for the 8th Digital Stone is against Team Air Force, who also has got 7 Digital Stones.[7]

Team ZEXAL then finally advances to the finals, where they face Team Shark.[8] 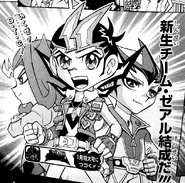 Team ZEXAL "reborn".
Add an image to this gallery

Retrieved from "https://yugioh.fandom.com/wiki/Team_ZEXAL?oldid=3282278"
*Disclosure: Some of the links above are affiliate links, meaning, at no additional cost to you, Fandom will earn a commission if you click through and make a purchase. Community content is available under CC-BY-SA unless otherwise noted.