E-Brake for a second

Now hold on we are sure this is going to be an accel synchro monster in the animae but there is a chance that they are going to do a dark synchro again and just make it a regulat synchro monster BUT!! there is a slightly higher chance that they will make it an accel synchro i saw something a while back about rule changes for accel synchros and they seem like probable rule changes involving accel synchros the extra deck count would go up to 20 with only 5 of them being synchro tuners then the max for the deck limit would go from 60 to 80 I will not conferm this information though for the last time i tried to i got shot and flamed massivally but that was when i thought duelist revolution would be holding the accel synchros which we now know they will be holding synchro fusions This is where i got the origional information -> [1] <- from but he does say duelist revolution is where we are going to get the accel synchros which is incorrect but his source could have been wrong on which pack That is what i have take it for what you want but i would like to say that we are not going to get this pack untill probably febuary of 2011 and that more information will come out as the July 17 date gets closer so BE PATIENT AND WAIT!!!!!!--EMPSBladeKnight60 20:34, April 30, 2010 (UTC)

Something I noticed that I'm curious no one brought up was that all the dark synchros were released as promos, none of them were released in actual booster packs in the OCG. Promo cards are usually altered since they are being released by themselves without their support cards and need new summoning conditions.(I.E. Sin Truth Dragon) Since the dark synchros were released as stand alone cards there was no dark tuner cards to go with them so they could not be summoned using the original method. However, Shooting star dragon is being released in a set, making it entirely possible to include Formula Synchron in the pack. Dark synchros were also only used by the antagonists while Accel Synchros have so far only been used by the good guys. there has been fusions of fusion monsters before so there's no reason for there not to be accel syncros. Also, for the people who think that accel synchros will be released as synchro fusions, that would make things more complicated not less. First of all, the synchro fusions in duelist revolution didn't require any specific monsters, only specific monster types, so if accel synchros were changed, shooting star dragon could be summoned by fusing ancient fairy dragon and junk synchron. The synchro fusion in the duel terminal set required two specific monsters so to summon SS dragon you would have to summon using stardust dragon and formula synchron. That would still require you synchro summon 2 monsters and you wouldn't have a choice of which synchro tuner to use, not to mention it would also require a polymerzation type card. A third option would be to make 1 card specific and the other card a specific type but that would be pretty much the same as the majestic cards. If it's a contact fusion to avoid needing polymersation or requiring the other monster it was fusing with to have a certain number of stars, then it's basically a synchro monster. In other words, the only way that accel synchros being changed into synchro fusions would work is if they were changed to the point that you might as well have just made accel synchros. The last thing you need to think about is that accel synchros are still synchros and therefore fall under synchro support. But if they're turned into fusions it would make combos that were possible as a synchro no longer possible. Now, I know that what I said about the dark synchros being released as promos doesn't nullify the chances of them being released as reguar synchros competely, but it does give you something to consider. And hell, maybe they'll be dumb enough to release them as fusions, but like shinobi said, it would be much simpler to just give them a contact fusion esque effect like blade gunner's.

TL, DR version: In the OCG, dark synchros were released as stand alone promos so they could not have released any dark tuners to go with them. Accel synchro's are being released in a set so they would be to have synchro tuners. Also, dark synchro monsters were a completely different kind of card that used a different summoning method, while accel synchros are to normal synchros what contact fusion is to regular fusion. and one last thing: Accel synchros are still cosidered syncros and fall under synchro support while dark synchros were not considered synchro monsters (They even have a different border) and do not fall under synchro support.

I have to say the new Karakuri set looks awesome, although im not sure about their playablity and they will probably screw the cards name up when they are released to the TCG (Just like the name "Watt". I mean what was wrong with Elec? I am happy wih the name "Fabled" though)... still, it should be a good set. --Its the EndOfTheWorld! Mwuhahahaha! 14:02, July 12, 2010 (UTC)

Whoever wants to upload images can find them here and here. Just be sure to name the file correctly and crop the edges. Falzar FZ (talk • contribs) 04:11, July 15, 2010 (UTC)

Where did you found this picture of a starstrike blast box?! 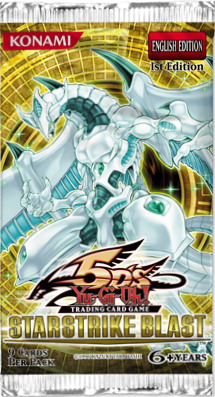 I found the TCG image here [2]

REALLY? cosmic synchro? what was wrong with Accel? lol Anyway, i think there's... 10 more cards from duel terminal 1 that have yet to be reprinted, but i doubt that all 10 cards in this set will be from Duel Terminal, i say 5, just like last one, so that will leave 5 duel terminal reprints for storm of ragnarok as well. So with the 5 available slots. Also the fact that with the release of Refpanel and Cyclone Creator and Fabled Raven, they're done with all of the cards from OCG Limited Edition Packs 1-15. 1. The Fabled Rubyruda, Fabled stuff just came out, plus more Fabled stuff is coming out around this time in Hidden Arsenal 3. 2. Genex Ally Duradark, Genex and Ally of Justice stuff is already out. 3. Dragunity Knight - Vajuranda, I believe the Dragunity Structure is coming out around November, but he's a dragunity KNIGHT, so i doubt this will happen. 4. Ash Gash the Ash King, it was a card from V-Jump, and gaia, kasha, and Kristya were turned into OCG exclusives, so why not? 5. Electro Sergeant, exact same logic as above, plus i feel we will never get Lancer Lindwurm, Axe Dragonute, and Lancer Dragonute in English unless they're suddenly added to the Dragunity Structure. I would love to see more hero support, but i'm pretty sure Konami would save those for Storm of Ragnarok or whatever set comes out after because of The Shining's release in March.

No, they aren't done with all cards from Limited Edition 1 - 15. Where do you put Pendulum Machine & E-Hero Ice Edge?

IMHO the Extras will Be:

-The Cover card for DT19, so that it doesn't release in TCG

-a VJMP Card, Hopefully Lindwurm, Because it's Too much time it has released in OCG and we don't still have it.

And, there still isn't any news about OCG exclusives? Where do you take news, YGO.Card, Shriek TCG and..?

Where does this news come from? (Royal Knight, Vajuranda & Co.)

No SD19 / Goes in Starstrike

The strong "rumor" is that SD19 was cancelled because it comes too early and undercuts Hidden Arsenal 3 (because it's Dragunity with commons of the team before they premiere HA03). That would mean the 5 new cards in SD19 are the announced Dragunity cards set for this set. Should an entry be changed to include the SD19 cards or would admins prefer we wait (even though it's likely). There is still no date set on SD19 and what IS being released at the time it should come out... is the SD Marik deck. A Deck ENTIRELY of reprints with the only hype being fanboy love for Marik. Think about it. ShinobiPhoenix (talk • contribs) 05:30, September 2, 2010 (UTC)

D I'm happy. Look at the Dragunities in STBL, the spoiler is out. There are only 2 dragnity monsters there; the ones from the OCG Limited Edition ones. That means there's still hope in SD19 coming out, either that or it'll be released in STOR :( please, Konami, PLEASE GET THE DRAGUNITY STRUCTURE IN THE TCG!!!!!Eric97861 (talk • contribs) 01:36, November 6, 2010 (UTC)

yea this is the info i hav from this cards

PSIblocker: during each of your standby phases u can declare 1 monster's name. neither player can use that card, until the end of your opponents turn.

spellstone sorcerer karood: cards can be removed from your graveyard.

skull meister: monster; during either player´s turn discard this card to negate any monster's effect that target one card on the grave.

droll and lock bird: you can discard this card during either's payer turn. during the turn this card is discarted, no card can be drawnd unless on the draw phase.

You should add Mechanical Spider. No doubt it's gonna be in the pack since "Karakuri" monsters deal with "Mechanical Spider" too. --Narutoheroes12 (talk • contribs) 03:33, September 17, 2010 (UTC)

hey guys you made a mistake!

hey guys you made a mistake! you wrote Exterio's Fang not "Extrio's Fang". even i am a new user i am very good at editing pages

It will be a Special Edition?

I remember Shining Darkness didn't has SE and but Duelist Revolution has... so... what do you think

Did this set ever get a second printing? I'm not finding any UE images, even for commons, and this Pojo user says there never was a second printing. --Golden Key (talk • contribs) 13:16, March 10, 2013 (UTC)

Retrieved from "https://yugioh.fandom.com/wiki/Talk:Starstrike_Blast?oldid=2370079"
*Disclosure: Some of the links above are affiliate links, meaning, at no additional cost to you, Fandom will earn a commission if you click through and make a purchase. Community content is available under CC-BY-SA unless otherwise noted.