Well, I find this in the internet, from this web page gamesmart.mx 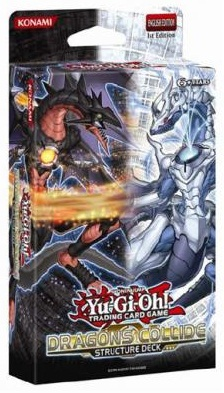 Shriek have a release date for the TCG version of this deck, Feb 7th 2012. I would suggest creating the relevant partitions on this deck's page to include the TCG release date etc, or creation of a whole new page, since the name has changed from Dragon Legion to Dragons Collide. Source: [1] Shamus (talk • contribs) 10:54, November 20, 2011 (UTC)

I think the problem arises from some Structure Decks having identical card lists to their OCG counterparts, whilst others have either been changed or not released at all. Once again, Konami's lack of consistency impacts negatively on the YuGiOh player-base. In this instance, it looks like the card list will be identical, so I would think inserting a new row in the title box would suffice, and having searches for "Dragons Collide" re-direct to this page would also help. Shamus (talk • contribs) 20:50, November 20, 2011 (UTC)

Then get Admin to jammed the edit for a week and let's relief about that, alright? If you see that gone, just revert it. --FredCat 18:20, March 30, 2012 (UTC)
Most of the time, once Structures come out, the list is removed from the page and moved to a sub-article of that structure. Set_Card_Lists:Structure_Deck:_Dragons_Collide_(TCG-EN) --> Summoned Skull 2: Electric Boogaloo 18:21, March 30, 2012 (UTC)

Yes, that, but what about all other Boosters that you missed all those years? Many of them still have lists sit there. I know that super ancient boosters already have them moved out. --FredCat 18:23, March 30, 2012 (UTC)

Well, I wish you wouldn't have, because I guess I was wrong about the structures. But, I do think that maybe it is unnecessary to have the list on the page itself, and then have the list again in another article. It's redundant. So, good work I guess? --> Summoned Skull 2: Electric Boogaloo 19:11, March 30, 2012 (UTC)

Generally speaking, the lists shouldn't be left on the page after the set's release, regardless of what type of set (booster, starter/structure deck, etc.) it is. In my experience, though, we do prefer to keep the lists until such time as the corresponding Set Card List page is created; since we don't have anyone actively creating such pages (not a surprise, considering the entire page has to be written by hand), we end up with spoilers on set pages even when the set itself has been out since the beginning of the game. 「ディノ奴千？！」? · ☎ Dinoguy1000 20:04, March 30, 2012 (UTC)

Yes, if the set has been released (and, conversely, if a set has a spoiler list, but does not have a corresponding list page, and someone removes the spoiler list, it should not be reverted/readded unless you are either planning on immediately creating the list page yourself (and thus need the spoiler list to work from, in which case you may want to just work from a revision of the page with the spoiler list instead of actually reverting) or the edit is obvious vandalism (e.g. if the editor just blanks the page, or replaces the list with gibberish or the like - otherwise, assume good faith)). 「ディノ奴千？！」? · ☎ Dinoguy1000 20:25, March 30, 2012 (UTC)

Actually, I don't know if that's necessary. Starters/Structures have OCG/TCG differences, so maybe the spoilers for those should stay. As for Turbo Packs and the like, I'm not really sure, I haven't checked those out yet. --> Summoned Skull 2: Electric Boogaloo 20:34, March 30, 2012 (UTC)

Many old Starter and Structure Decks have difference, till Konami kicked UDE out and took over - the business went serious down the hill. --FredCat 20:36, March 30, 2012 (UTC)

Continuation of above topic.

Okay, while I like the Card Lists that are made on the separate page, I actually prefer having the card list of that article on the actual page itself. Skullvarnish just replaced it again while the discussion was going on. Is there any way that the page with the card list is instead merged into the card page about the box itself? Make the current list into the list on the side page and just keep it all together? The second list is MUCH more informative and is also sortable but the first is actually on the page in question. It is sort of like how the archetype pages have the monsters in that archetype at the bottom. it just doesn't seem like a "frog" page if the "frogs" are not on the page, right? The same is here too. I like the ability to just scroll down through the cards without having to jump to different pages. --LordGeovanni- (Talk To Me) *Kupo* 20:39, March 30, 2012 (UTC)

As for me replacing it while the discussion was going on, I did that because I noticed that having the spoiler list was the norm for Structure Deck pages. --> Summoned Skull 2: Electric Boogaloo 20:49, March 30, 2012 (UTC)

Currently, in order to have the list in both places, we'd need to either duplicate the information (as is currently done), which means that any changes have to be done in two places instead of one, or we'd have to transclude the list page into the set page (similar to how templates are used), which has a bunch of issues of its own. I think, probably, that the best solution in the long run would be to figure out some reasonable way to make the links to the list pages much more obvious (though I'm not sure what might work in that regards). 「ディノ奴千？！」? · ☎ Dinoguy1000 20:53, March 30, 2012 (UTC)

Sorry to put that out, I was only trying to state that there were still edits going on when there is a discussion about this happening. I actually like the Spoiler lists being on the pages in question. Booster packs, Structure decks, Duelist packs, all of them. I think that they should have the cards at the bottom. Not on a separate page. I would actually prefer if the list on the second page was used as a query or something, showing the Card name, Type, Monster/Spell/Trap Type (Effect/Synchro/Continuous Spell/Field Spell/Counter Trap), Monster Sub-category (Tuner/Spirit/Toon), Attack, Defence, Monster Type, Monster Attribute. (There may be more, but I cannot think of them without looking). --LordGeovanni- (Talk To Me) *Kupo* 20:58, March 30, 2012 (UTC)

Dinoguy1000, I really would prefer for the pages to be combined instead of trying to coerce people to another page with the info. Why shouldn't a page about "Structure Deck: Dragons Collide" include the cards from "Structure Deck: Dragons Collide"? I do wish that the list was more appealing, however. Is there any way to add a Query flag for what set it is from? Maybe we could add a query search to the page instead? --LordGeovanni- (Talk To Me) *Kupo* 20:58, March 30, 2012 (UTC)

Instead of talking about this issue on a single pack's Talk page, can a Forum page be made on this issue? Make a page, Have a Wikia wide poll, and decide in a week if the spoiler should remain on the pages, be updated, or removed completely. That I think would be the best option. In the mean time, can we replace all the pages that have been edited until a final agreement is made? I am already aware that Starstrike Blast has been edited as well. --LordGeovanni- (Talk To Me) *Kupo* 21:11, March 30, 2012 (UTC)

Retrieved from "https://yugioh.fandom.com/wiki/Talk:Dragons_Collide_Structure_Deck?oldid=3306201"
Community content is available under CC-BY-SA unless otherwise noted.