Tales of the Noble Knights is a fictional piece of literature first mentioned in the flavor text of "Noble Knight Artorigus". Its contents were further revealed in articles on the Yu-Gi-Oh! TCG Strategy Site to promote the then upcoming TCG product, Noble Knights of the Round Table Box Set.

No one shall ever know the truth behind
That fateful day. Artorigus went forth
To where the brilliant sword didst lay.
‘Twas the first of many feats so great,
A legend through and through. We sing of him,
Artorigus, the Noble and the brave.
-From the Tales of the Noble Knights

The Trial of Gwenhwyfar

Much is known about the end result of Artorigus’ final battle at Avalon, a miracle, though not without cost. But few are aware of the important role the good queen, Gwenhyfar played on that day. Sit a spell, and listen well, and know the truth behind the myth... 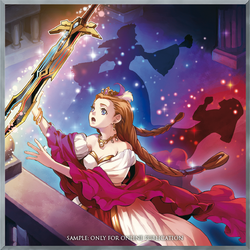 As she stood beside the Backwards Man,
Two tears raced down her cheek.
Artorigus lay ‘pon the bed,
Eyes closed, and breathing weak.


“It’s a miracle at all he lives,”
Mused Merlin, at wit’s end.
“His body fights the poison hard,
But time is not his friend.”


The old man doffed his beaten hat,
Sweat beading at his brow.
And Gwenhwyfar’s mouth twisted sad,
She spoke but one word: “How?”


“We won him time in coming here,
But he may be too far gone.
The only thing ‘twixt him and death’s,
This place, this Avalon.


“What evil spilled out from Medraut,
Infected and betrayed.
His blood became a poison,
And it smeared the traitor’s blade.


“And now it courses our King’s veins,
And I’ve no cure in mind.
The magic of this place is all,
‘Keeps death one step behind.”


The words stung deep in Gwenhwyfar,
“The Traitor,” now his name.
The man whom she felt in her heart,
Was not in whole to blame.


For while Laundsallyn’d lifted sword,
And had struck down his King,
His heart was always true to him,
Except in but one thing.


Would he perchance been strong enough?
Could he have fought the blood?
If his heart had simply remained pure,
Not clouded, as with mud.


She fought a tightening in her throat,
A guilt she’d not confide.
The Traitor stood here in the room;
It burned her cold inside.


But Gwen’s heart hardened then and there,
She clenched her tiny hand,
She turned to Merlin, straightened tall,
And made her soft demand.


“My King yet breathes, oh wizard,
I know something keeps him here.
I won’t accept death’s sentence now;
You’ll help me interfere.”


Merlin sighed, and nodded,
Once again he doffed his hat.
He dabbed his brow, “I’d hoped,
M’dear, that you’d not ask me that.


“It’s true for him there may be hope,
Fate’s plans may yet be swerved,
But the cost and risk are high in this.
Some trials aren’t deserved.”


Gwen nodded firmly, set her jaw,
And boldly raised her chin.
“I’ll do whatever I can do,
Whatever might save him.”


The Backwards Man could look ahead,
But couldn’t see the past.
He didn’t know that Gwen would fight,
Until she breathed her last.


For love and guilt spun in her heart,
And wove a feeling strong.
Gwenhwyfar’d do anything,
She could to right her wrong.


“Then there’s no time to be wasted.
If there’s hope, it lies in luck.
By the graces of this Fortunate Isle,
A deal may yet be struck.


“I bid you seek Excaliburn!
We need the sword again.
Its magicks might yet save our King,
Rush to the Nimue’s fen!


“I never should have tarried,
And now precious minutes lack.
Get the sword by sundown,
And my spells can bring you back.”


“But remember this, dear Gwenhwyfar,”
Eyes narrowed, Merlin spoke:
“No promise made on Avalon,
May ever but be broke.”


“I vow it now,” the Queen replied,
Voice pausing not a breath.
“If the island wants to test my heart,
I’ll save our King from death.”

In the beginning, I saw the end.

On the shore of a lake, in the heart of the wood, I saw a man. Clad in armor with a cape as red as blood, this was a man who knew war. And now, he knew peace.

A man with a red blade had stalked him to this place and struck him down, before himself departing. But not before the caped knight had discharged his final duty. 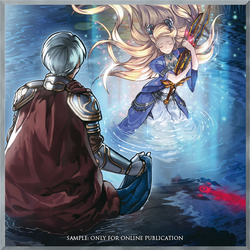 “I am Bedwyr, friend of Artorigus!” he bellowed, “And I believe this belongs to you!” He had been carrying a peculiar sword, wrapped in cloth. The sword was unlike any other, with two blades extending from its golden hilt. The warped and broken blades made it clear that this sword had seen its final battle. Bedwyr, having made his proclamation, cast the sword into the lake, but as the blade neared the water’s surface, it suddenly stopped. Where once was open air, there now was a beautiful woman, cradling the sword in her arms as if it were a child. The woman now descended slowly into the lake, and as she did an unearthly voice rang out. 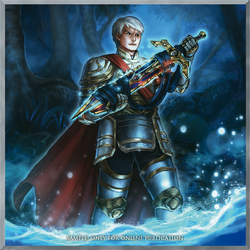 I met the man Bedwyr at the edge of the forest, alive and well. His tired eyes filled with fury at the sight of me. “You provided sage counsel so many times throughout his life. You could have warned him! You should have warned him!“ Bedwyr’s voice trailed off as his rage was replaced by sadness. This man had lost a friend. Artorigus, was it? Not just a man, or a friend, but a king, Bedwyr explained. Artorigus had summoned Bedwyr and assigned him one final task before breathing his last: to lay the sword Excaliburn to rest in the lake at the center of the woods. A task he had failed twice thus far. I remained silent. Bedwyr spoke again. “There’s no escaping this, is there? Every time I try to leave, I wind up back in front of the forest...” I considered warning him of the lakeside ambush, but realized it would do no good. What was to be, would always be, for it had already been. “Take care of yourself, Bedwyr”, I said. And at that, he ventured into the woods.

Retrieved from "https://yugioh.fandom.com/wiki/Tales_of_the_Noble_Knights?oldid=3987239"
Community content is available under CC-BY-SA unless otherwise noted.