View source
watch 02:05
Wiki Targeted (Games)
Do you like this video?
Play Sound

Téa Gardner is a playable Legendary Duelist in Yu-Gi-Oh! Duel Links. This is a video game depiction of Téa Gardner, a character from the Yu-Gi-Oh! anime.

She appears in-game after the player reaches Stage 5 of Duel World (DM) and can be unlocked as a playable character starting at Stage 6.

Blue Gate Keys are required to Duel Téa Gardner at the Gate.

Téa is Yugi's childhood friend who dreams of becoming a professional dancer. Though she won't call herself a Duelist, her bravery won't allow her to back down from any Duel.

After the player advances to Stage 5, they will encounter Téa for the first time. She initially expresses dismay that her friends registered her as a Duelist, even though she only came to Duel World to cheer on her friends. She complains that it's not fair, especially since she doesn't even know what cards are in her Deck. However, she audibly decides to make the best of her situation and take the chance to improve her Dueling skills.

When the player challenges Téa to a Duel for the first time, she finds out from the player that they can't advance unless they defeat her. She briefly considers letting the player win, but decides that because it wouldn't be fun, the player wouldn't want that either. She then admits that although she may not be the toughest Duelist in Duel World, she has the heart of a champion, and prompts the player to Duel her.

Upon Téa's first defeat, she briefly expresses frustration, before deciding that she should practice more so that she'll never feel like this again. She then prompts the player to "keep up the good work," and says she'll be cheering them on.

After the player redeems their final unclaimed reward for Téa Gardner's Character Unlock Missions, they will encounter Téa again, who resolves that she's going to start Dueling every day. She reveals that this is because she has a dream of becoming the Duel World Queen, and that she'll accomplish it with the "Dark Magician Girl" card she possesses. 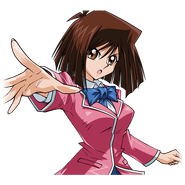 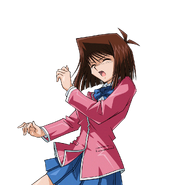 Judgement of the Faries
Monsters (13)

The following lists are the rewards the player accumulates from having Téa Gardner reach a certain Level.

When dueling against Level 40 Superb Téa, these are the only cards that can drop; at lower levels, cards from the standard pool for Legendary Duelists may also drop.

*Disclosure: Some of the links above are affiliate links, meaning, at no additional cost to you, Fandom will earn a commission if you click through and make a purchase. Community content is available under CC-BY-SA unless otherwise noted.
... more about "Téa Gardner (Duel Links)"
RDF feed
DULI Deck
Téa Deck +, Sm. Symbol of Friendship +, Symbol of Friendship +, Angel and Friendship +, Brilliant Angel Ring +, Triumphant Faries +  and Judgement of the Faries +
English name
Téa Gardner +
Gender
Female +
Video game appearances
Yu-Gi-Oh! Duel Links +